5 Ways Journalism Taught me to be a Better Creative Writer

When I was a kid, I told myself I would never go into journalism. It was too terrifying for an introvert like me. How could I ever talk with all those people? As it turns out, I ended up taking newspaper workshop to fulfill my writing minor in college. So there I found myself last semester doing the very things I was terrified of doing: talking.


But I learned several things along the way.

I despise sending e-mails. They are incredibly stressful, especially since I often re-read them five times, click send, and then catch a grammatical error. How frustrating is that?


Nonetheless, e-mails must be sent in order to make necessary contacts. In my journalism writing class, it was considered polite to set up an appointment prior to an interview, which involved many e-mails. Even though I had sent many e-mails prior to taking this class, I had never sent so many each week.  This constant routine forced me past my fear and into clicking the send button.


This skill of sending e-mails is essential for any writer today, especially creative writers. What better way is there to send out an e-mail to a publisher than by practicing?

2) How to talk with people I don’t know.

College overall taught me this, but in this particular class, I had speak with a lot of people I didn’t know. Although the thought initially scared me, another thought kept me going. If I didn’t speak with people and get any of my interviews, I would undoubtedly receive an F. And for me, a B or below is scarier than talking with a person.


In some ways, speaking to people is necessary for writing. If I, as a writer, am never willing to meet to new people and establish new relationships, how could I ever hope to get anything published? And the prospect of never getting published is scarier than any potential rejection letter.

3) How to talk with people I know.

It's harder to ask people I know for things than it is to ask strangers. At least with the latter, I can be polite, and I will probably never see them again. With people I know, I have to be more careful because I will see them again. And again. Chances are, they might not remember a blunder, but I will.
While I didn’t necessarily get over these fears, I came up with a strategy. When approaching somebody I knew, I always had icebreaker (not to be confused with a bribe). I liked to walk up to people with a box of chocolate and offer them a piece, ask them how their day was, and then ask about an interview. It worked wonders.
Even after the interviews, I talked with the people I knew and developed relationships, which is beneficial for writers, readers, and people alike.

4) How to interview people.

This is not quite the same thing as talking to people. That requires courage. Interviewing requires knowing the correct questions. Once I knew these, everything became a simple matter of listening and recording.

Interviews can be helpful for fiction and nonfiction writers alike in order to ensure accuracy historically, scientifically, psychologically, etc.

Another difficult things for any writer is word limit, but I have a tendency to write more than is required. Instead of scrambling to put in filler just to make 250 words, I would often end up with too many.

This often resulted in cutting out words and even valuable material. Often times, I would have three pages worth of interview notes but had to summarize this information to one page. Each time I wrote an article, I had to focus the main essence and sometimes leave things out.

While cutting words may hurt, it can prove beneficial. The more concise and direct a piece of writing is, the better. It’s also great for writing flash fiction. Less is more!


This entry is not to say that I have mastered journalism or my fears. But I have learned that some people are not as scary to talk with as they may originally seem and that various disciplines can teach necessary skills to creative writers.

Do you know any other ways that journalism could benefit creative writers? Are there any instances when facing your fears helped you learn something?

Books and films are like meals. Some can be well written by great writers (gourmet chefs) or mediocre writers (short order cooks). While readers may have different tastes, there are many books and stories that are less fulfilling than others. The difference between rich plots and poor ones is like the difference between a twice baked potato and a half empty bag of potato chips. 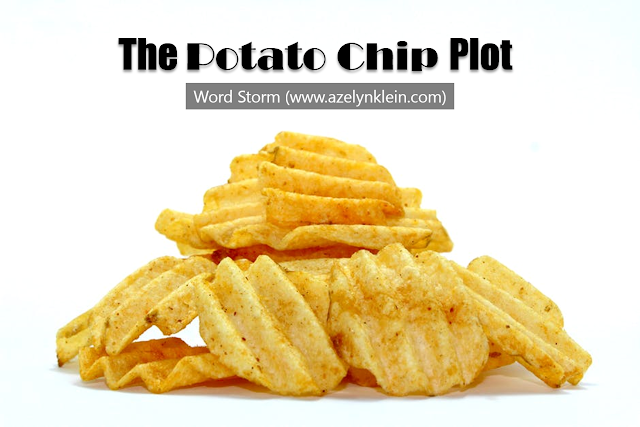 Below are some indicators of the potato chip plot (aka. plot filler):


In this stage, the brain enters cruise control stage and disengages from the plot. Sometimes the audience falls asleep after the beginning, wakes up for the end, and understands everything that happened. Take for example, the Terminator movies. I did fall asleep to the first two films and woke up for the endings. Yes, everything still made sense.

Of course, there may be some stories where audiences can watch the beginning and the end and understand everything but completely miss the character development in the middle, but said middle should not be all air.


Forget the card. Let’s give the protagonist unlocked doors for no reason and a helicopter to make a great get away. And—by the way—nobody happens to know where it came from. In other words, the protagonists end up in improbable situations with some mysterious advantage that was not built up to. This element is an annoying old technique also known as Deus ex machina.

For example, in The Hobbit: Desolation of Smaug, why did there just happen to be a giant statue of rocks sitting in the throne room for decades with gold that was just waiting to be melted into it? In the Battle of Five Armies, where did the mountain goats come from?


The characters are going, going, going. They’re fighting the enemy! And…they’re not getting anywhere. Similar to the snooze button, except the audience is actually following the plot, which is all fluff. The treadmill is often found in battle scenes of action/adventure movies and is usually found in movie adaptations of books. Such scenes extend or add something the author did not originally intend and should have stayed that way. For example, the final half hour of Desolation of Smaug focused more on excellent graphics and less on plot development.

So with all of the plot filler of potato chip plots, here are just a few ingredients found in many rich, dense plots:


Okay, you can blink. This isn’t Dr. Who. But you do want to pay attention to what’s happening because it will play an important role later. Such detail is often found in the Sherlock Holmes books and in the Sherlock adaptations. While not all plots have to engage the audience like a detective story, every element, line, and character should be necessary. This makes the story dense, like a fulfilling meal that leaves audiences satisfied.


The counteraction to Deus ex machina, foreshadowing acts as a way to hint at what is to come. While it may not always come in the obvious form of an outright prophecy, it prevents audiences from questioning the author’s motives. Instead, it provides audiences with an aha! moment.


Perhaps one of my preferred elements, character development makes books worth rereading or films re-watching. It’s more than just an added benefit but a necessity to memorable stories. In The Lord of the Rings, such development is abundant from Aragorn to Pippin, and the books themselves have more to offer than the extended film adaptations.

Of course, this list is not an extensive description of plot filler and plot development, but it provides some overview. What are some aspects of plot filler/development that you often notice? Are there any poor/well developed stories that stick out in your mind?

Literary and film references: Orion Pictures’ The Terminator, Warner Bros.’ adaptations of The Hobbit, Sir Arthur Conan Doyle’s Sherlock Holmes collection, BBC’s Sherlock, and J.R.R. Tolkien’s The Lord of the Rings trilogy.
Posted by Azelyn Klein at 10:00 AM No comments: