There are five-star books, and then there are five-star books I will rant about and collect and try to convince everybody else to read. I listed these books as treasured instead of favorite because I don’t believe in favoritism. The following books are some that have had the biggest impact on my life and are treasures for different reasons. The following are listed in alphabetical order, not in order of importance. 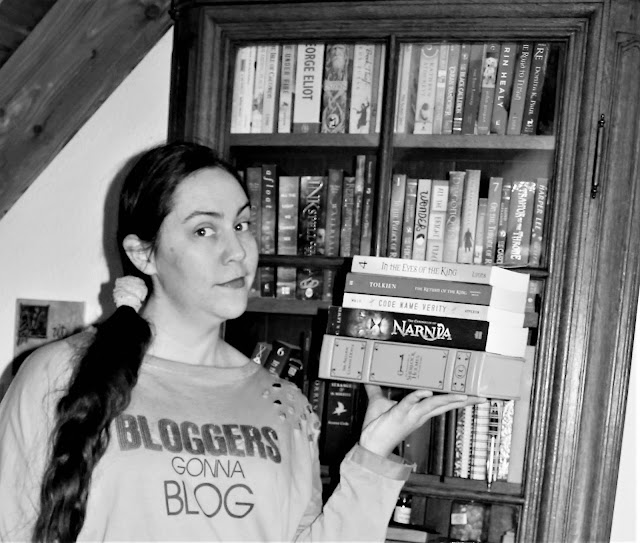 “BUCKETS OF BLOOD, WHEN DO I GET TO FINISH MY GREAT DISSERTATION OF TREASON?”

Set in Nazi-occupied France during 1943, this novel follows the lives of two British women, a pilot and an informant. This fantastically-written tale has a unique perspective that instantly made me empathize with the characters and kept me turning the pages until the very end.

In the Eyes of a King (The Alliance series, book 4) by L. Nicodemus Lyons

The continuation of the adventures of General Corden and Princess Marie, In the Eyes of a King picks up where On the Isle of Caledron left off. This time, Corden and the Temanites are faced with a new, unexpected enemy who will challenge their beliefs concerning sacrificial love and forgiveness. For a review of the first book in the series, In Palace of Rygia, click here.

“But a man can be both soft and strong, maintaining a hope for the world.”

Thomas Fawkes just wants his father’s acceptance, and he’s willing to do anything to anything to get it—even if it means committing treason. If he can stop the stone plague from consuming him while he’s at it, even better. Part-historical fiction, part-fantasy, Fawkes tells an entrancing tale about belief versus truth with some humor sprinkled in along the way.

“There are no ‘ifs’ in God's Kingdom. His timing is perfect. His will is our hiding place.”

The true, inspirational story of a middle-aged watchmaker who courageously hides Jews in her home in Holland during WWII. My mom and I first listened to the Focus on the Family adaptation, and afterwards I just had to read the book. Although this book deals with difficult topics and the holocaust, it is still a book full of hope and perspective only God could give.

Okay, this book is my favorite. The inspired word of God. How amazing!

“A reader doesn't really see the characters in a story; he feels them.”

The conclusion of the Inkworld trilogy, set in a world where some readers are gifted with the ability to read characters out of stories and people in. But even living inside the greatest stories can have treacherous consequences. The entire trilogy plays with the differences between fiction and reality, love for stories and love for people.

“But when the fairy sang the whole world listened to him. Stephen felt clouds pause in their passing; he felt sleeping hills shift and murmur; he felt cold mists dance. He understood for the first time that the world is not dumb at all, but merely waiting for someone to speak to it in a language it understands. In the fairy’s song the earth recognized the names by which it called itself.”

As strange as it sounds, this epic fantasy follows the practical Mr. Norrell and the curious Jonathan Strange, the two magicians destined to bring magic back to England yet doomed to fail in their ultimate quest. Filled with masterful wit, excellent writing, and natural and practical magic, Clarke’s book is thick enough to more than satisfy the fantasy-lovers taste for the unusual.

To Kill a Mockingbird by Harper Lee


“It was times like these when I thought my father, who hated guns and had never been to any wars, was the bravest man who ever lived.”


There are so many takeaways from this classic. Though I may not agree with each one in the book, To Kill a Mockingbird is an excellent story of a young, American tomboy.

The classic that might turn a pacifist into a revolutionary, Hugo’s tale is a story of love and loss, justice and mercy, failure and salvation. I didn’t really become acquainted with the story until I was in college.

Watch it as a musical. Listen to the audio drama. But better yet, read the book.

A forest fire forces Posie, a young raccoon, and her family to move, and they encounter an “upright” girl, a human. A charming, children’s story of family, fellowship, and sacrifice. This the book is the first that inspired me to become a writer. In third grade, one of my teachers took our class on a field trip to meet Mrs. Edgren. She talked about the raccoon who served as the inspiration for the book and told our class about writing and plot. I will never forget my first experience meeting a published author.


A Monster Calls by Patrick Ness


“Stories are wild creatures, the monster said. When you let them loose, who knows what havoc they might wreak?”

A tale both tragic and beautiful, A Monster Calls has a unique perspective on grief. Part graphic novel, part novel, the story follows the life of a young boy and the stories that the monster tells him.

“Of man’s first disobedience, and the fruit / Of that forbidden tree, whose mortal taste / Brought death into the world, and all our woe, / With loss of Eden, till one greater Man / Restore us, and regain the blissful seat, / Sing heavenly muse…”

This poetic retelling of the creation and fall of man is a classic tale told within elements of the epic and romantic traditions. Full of vivid imagery, this story follows multiple perspectives from that of man to that of God to that of Satan, which has left scholars wondering whose story it really is.

The Princess Bride by William Goldman

What’s not to like? Another one of the classics. Better than the movie. Don’t bother looking for the unabridged version; it doesn’t exist.

“‘But no living man am I! You look upon a woman. Éowyn I am, Éomund's daughter. You stand between me and my lord and kin. Begone, if you be not deathless! For living or dark undead, I will smite you, if you touch him.’”

The final chapter of The Lord of the Rings in which Frodo continues to struggle against the power of the One Ring on his journey towards Mt. Doom while the rest of Middle Earth battles for against the dark armies of Sauron. The extended edition films portray the story well, but the struggle and characters are twice as real in the books.

The Scorpio Races by Maggie Stiefvater

“It is the first day of November and so, today, someone will die.”

The island of Thisby is home to the annual Scorpio Races. Sean Kendrick, a previous champion, and Puck Connolly, a recent orphan struggling to make ends meet, both sign up for the coming race to achieve what everybody else considers sure impossibilities.

The Silver Chair (The Chronicles of Narnia, book 6) by C.S. Lewis

“‘Puddleglum is the name. It doesn’t matter if you forget it, I can always tell you again.’”

An unlikely trio—Eustace Scrubb, a reformed bully; Jill Pole, a bullied schoolmate; and Puddleglum, a Narnian marshwiggle—set out on a quest at Aslan’s bidding to find the lost prince of Narnia. There are so many things I like about this book: Puddleglum’s apparent pessimism, Jill’s relatability, the details of the setting peppered throughout the story, and much more.

Spensa is determined to become a pilot despite growing up being called a coward’s daughter. Another female pilot! YES! Ever since I discovered his Mistborn books, Sanderson has become one of my go-to authors.

Ender made the mistake of helping humanity wipe out an entire alien race. He will not allow humanity to repeat the same mistake again. Or will he? Told from various perspectives—that of Ender Wiggin, Miro Ribeira, Han Quin-joa, and even the pequeninos—this book explores not just what it means to be human but also what it means to be utterly alien yet intelligent and benevolent all the same.


For well-known fictional books such as The Return of the King and To Kill a Mockingbird, I will not write book reviews because there are already so many reviews out there. Nonetheless, I strive to write reviews for newer books as listed above.