Today is a special day. Nearly two years ago, I started Word Storm, and this, my friends, is my 50th post! Woohoo!


I’d like to thank my mom for getting me that book on journalism that started me on blogging, my friend Sarah for encouraging me to start a new blog, my fellow-blogger and critique partner Faith, and all of my lovely readers. So thank you for putting up with my crazy book-ish ramblings thus far.


Due to excessive coursework, I’m going to take next month off blogging. *gasp* How could I? Stated simply, I have to write two major essays and a dissertation (a.k.a. a master’s thesis). In all, these assignments amount to nearly 25,000 words and have the same amount of stress as your average NaNoWriMo project, if not more. But I have a special post already written and hope to see you back for my regulars posts in June.


And now, for a poem. This one’s pretty simple. I wrote it for fun one day when contemplating one of the most-pressed keys on the keyboard. Whether you’re a writer by trade, a find-and-peck expert, or someone who occasionally uses a computer, you’ve likely encountered this key before… 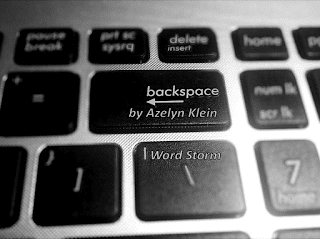 A writer’s favorite key with a very distinctive sound;
don’t you just adore the moments you’re watching a movie
with a writer at work, and you hear the unmistakable click
of a backspace? How do you know? Is it the twisted anger
or the constant pound Pound. POUND. POUND! POUND!
all in succession that gives it away. Let me hand out
this particular key like a prankster passes out pins in
a theme park to pop children’s balloons—pop Pop. POP. POP! POP!
—first it’s startling, terrifying, the imminent destruction
of hard-earned, cheek-blown rubber destroyed in a matter
of seconds. It’s like running up the down escalator—
with each brilliant idea comes twenty regrets
tumbling one after the other all dragging you down, down, down.
Remember the time you tripped up the stairs and bruised your knee?
Yep, that’s the humiliation of the Backspace,
erasing your splendid, stupid thoughts.


What was your worst run-in with the backspace? What's been your favorite post from this blog so far?
Posted by Azelyn Klein at 2:25 PM No comments:

7 Things I Wish I Knew Before I Started Blogging

So you’re thinking about starting a blog. Or maybe you already have and you’re curious about what I think about the process. Or I’ve forced you to read this post because you’re my critique partner. Whatever your reasons for reading this, if you’re remotely interested in blogging, this post is for you. 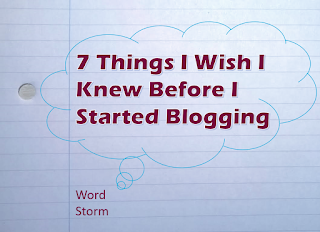 At first it may taste funny on your tongue, but like sparkling water or black licorice, you may just learn to like it. Now, like John Watson from the modernized Sherlock, I can proudly claim to be a blogger. So if you’re thinking about starting a blog, embrace the title of blogger. There’s no escaping it!

I mean seriously. I don’t know how many times adding a picture to a blog post, and it messed up EVERYTHING. Or how many times I had to fix the spacing, especially when I hit backspace, and Blogger interprets the backspace as an enter stroke. Blogging is about a lot more than simply copying and pasting stuff from a Word document. And I still don’t know everything I want to know yet. There’s still coding, which I might peer into once I graduate.


Unfortunately, there’s no avoiding formatting. And you have to learn how to do it properly or else nobody will want to read your blog. But…

At first, it was more of a chore for me, but as I wrote more and more posts, I found what I liked to write. Instead of merely writing fiction all the time, I had adopted a form of nonfiction. Sometimes it’s a critical vent about something I wish could be changed but others times it’s fangirling about something entirely different.

“I’m just going to write a blog post really quick.” Yeah. Sure. Usually “really quick” turns into three hours of ideas, creating pictures and playing with fonts, and formatting that stupid paragraph again and again and again. Dear readers, you have no idea how much work I go through for each blog post.

Just like you get stronger the more you work out, the more you exercise your imagination, the stronger it will become. When I first started blogging, I struggled to come up with ideas. Sometimes I would postpone my posts for lack of ideas or time. But the more I wrote, the easier it became. And now I have a schedule and I’ve been ahead on my blog posts for up to a month in advance.

6)     Getting involved in the blogging community is a MUST.

This is the point I perhaps have the most challenge with, being an introvert. But the more time I spend blogging, the more of other blogs I read, and the more I try to leave comments. After all, what better way to support other bloggers than to treat their blogs the way you want yours to be treated. Not only does it give bloggers feedback with your comments but it also helps share your own blog. It’s a win-win scenario for both bloggers.

It’s about you, the readers. Yes, I write blog posts to communicate, but communication is a two-way process! So thank you, dear reader, for being your amazing self and reading this post. If there’s anything you like about my posts or wish I would change, be sure to let me know. I hope to see you next week.


Do any of these points relate with you? What would you add to the list? If you haven’t started a blog yet, what are some things you’d like to know?
Posted by Azelyn Klein at 7:41 AM No comments:

Living Under a Rock 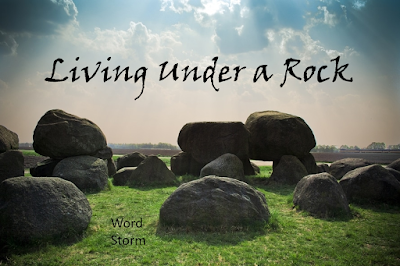 Typically, the first year I live anywhere is a blur. It’s that unsettling year of confusion trying to find out how a place works and figuring out how to make a routine and friendships. The first and only year I lived in El Paso, Texas is an exception. I remember lots of things—the mountains and the view of Mexico from my bedroom window, the day we had to put our dog down, the afternoons I spent riding and grooming my horse Connie, and starting community college.


I remember when I was signing up for my classes in community college and my advisor sat me down, glanced at my high school records, and asked if I didn’t want to major in law instead of English. Essentially, why would anybody want to waste talent on studying a language they already speak? I was flattered at the remark on my previous grades, but I stuck with English anyway and breezed my way through my freshman year.


As the spring semester rolled around, my dad received orders to move to Germany. And I was determined that I would go along with my family. There was only one problem—my education. How would I manage to major in English in a non-English speaking country? After much consideration, and several changes of plans, I ended up attending Evangel University that fall.


And many more things changed.


I still majored in English but I also took up a minor in writing and joined Epiphany, the university’s literary magazine staff. But it didn’t take me long to learn that university life was much harder than community college. I panicked when I received my first D on an essay, and not for lack of trying. Having been used to getting all As, such a grade was an unheard of disaster. And while I adjusted to a new level of work, I never quite got used to the reading lists—there were so many readings lists for so many literature classes.


Sitting in British Literature one day, staring at the assigned texts for our course, I realized that I recognized most of the titles but had only ever read maybe one or two of them. And I was an English major! Looking at my friend and classmate, Faith, I said, “I feel like I’ve been living under a rock my whole life.”


Wasn’t I supposed to be a bookworm? How was it that twenty books for a college class should make me feel so ignorant? That semester passed, and the next, and the next. Now that I’m in grad school studying English literature, I still don’t think much has changed. Yes, I’ve read countless books in the past four years, but I’ve also learned that there is so much more to learn.


Studying English in my undergraduate gave me some of the basics, and majoring in English literature at a postgraduate level showed me there are even more things to learn, let alone read. I may have taken a class on Shakespeare, but I haven’t read all his plays. I have studied A Tale of Two Cities, The Faerie Queene, and The Great Gatsby, but I have yet to read Great Expectations, The Merry Adventures of Robin Hood, and 1984. And my to-be-read (TBR) list is ever growing.


Studying English has given me a mere sampling of the world’s literature. It’s shown me that learning is a continual process and that there’s more to being an English major than being a Grammar Nazi. (Which I’m not by the way. I don’t want hold people up to such standards when I can’t spell half the time.) And it’s like my mom used to say, “The more you know, the more you know you don’t know.” I don’t have to feel like I’ve lived under a rock my whole life, basking in ignorance just because I had different experiences.


On the other hand, I’ve visited Israel with Sherlock Holmes in O, Jerusalem when I might never visit in person while turmoil continues. Through reading, I’ve seen fictional worlds such as Narnia, Middle Earth, and Hogwarts. I’ve even visited Mars within the pages of Out of the Silent Planet and A Princess of Mars.


So no, I haven’t lived under a rock my whole life, though sometimes it feels like it. There’s just more places to discover, more books to read, and less to take for granted—even the ordinary days when I’m at home with family and a shelf full of books.


Have you ever felt like you’ve lived under a rock when considering what you haven’t read? How many books are on your TBR list?