This year, I’m concluding my blog posts with the finale to my latest mini-series, A Study in Foreshadowing. I’ve already written about Why Foreshadow? and How NOT to Use Foreshadowing, and today I’m going to sum it all up with Three Methods for Foreshadowing.

Caution: Because of the nature of foreshadowing, the way that it includes predicting of plot events and its fulfillment, this post includes some spoilers to The Lord of the Rings and Frozen. 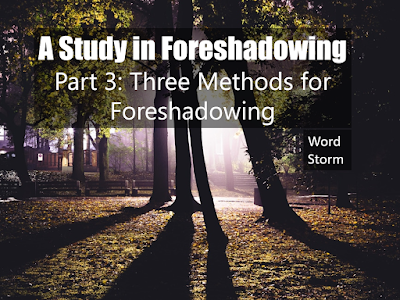 I’ve already mentioned before that I’ve read a couple posts on what foreshadowing should do but not how to do it. I’d like to change that. So here are just three of the ways I’ve found that different stories have used and succeeded with foreshadowing. I have arranged them according to their difficulty to write well and their levels of subtlety.

This technique is more often known as Chekhov’s Gun for the principle that every word in any story should be necessary. In essence, if a gun is mentioned as being in a room it has to go off, or else serve as some key element for the plot. This form of foreshadowing can take place in dialogue or in imagery. We see it all the time, whether or not we notice it. Characters who speak often of death tend to die, and whenever something is hinted at being dangerous or a bad idea, it usually is.

However, useful as this technique can be, it also tends to be more obvious so that most careful audiences can easily pick up on what is going to happen. Without knowing any of the spoilers, my mom predicted the end of Rouge One based off clues from the previous Star Wars episodes just as she does with almost every movie we watch. Most Marvel movies, which I tend to enjoy them immensely, can be predictable in this sense. I remember re-watching Captain America with one of my friends, and even though she hadn’t seen it yet, she managed to predict the scene when certain characters would die. Yikes.

But that doesn’t mean every plant has to be completely obvious. Perhaps the genre that does this method the best is, of course, mystery. Although classics like the Sherlock Holmes books tend to conceal the important clues until the very end, adaptations like BBC’s Sherlock include them so subtly that they’re usually unnoticeable until the end. For example, in A Scandal in Belgravia, the final event on the airplane where the confrontation between Sherlock, Mycroft, and Irene Adler is alluded to at the very beginning and throughout the episode, but the audiences don’t know how it’s important or what it means until the end.

Some tips for using the plant: make sure the readers see it, but don’t let them know what it means; include a hint at what’s to come, and turn it on its head; make every word count, but be subtle. Remember, the plant can take many forms from an item on a desk to something somebody says. Use your imagination, and don’t be afraid to be clever. Great foreshadowing makes for great rereading. That’s when audiences go back and say, “Oh! That’s what that means. How didn’t I see that before?”


Some of the best examples of prophecies come from The Lord of the Rings. Although the book is full of prophecies and allusions to the future, one of my favorites is the prophecy concerning the death of the Witch King, which says no living man can kill him. It sounds very specific, and in the end, no living man does. He is instead slain by Eowyn (a woman, not a man) with the help of Merry (a hobbit). It’s not that he couldn’t be killed, just that he wouldn’t be by men.

Another great prophecy is found in Jonathan Strange & Mr Norrell. Near the beginning of the story (Beginning, ha! It’s somewhere in the first 200 pages…), the street magician Vinculus appears to Mr. Norrell and tells him:

“Two magicians shall appear in England. The name of one shall be Fearfulness, the name of the other, Arrogance. The first shall fear me, the second shall long to behold me. The first shall bury his heart in the dark wood beneath the snow, yet still feel its ache. The second shall see his dearest possession in his enemy’s hand. Both will fail. The nameless slave shall be a king in a strange land. I will return.” (Quote taken from the BBC adaptation for brevity.)


At first, Vinculus’ prophecy seems rather odd and confusing. In the book, it’s twice as long, and it’s not until the end of the story that it’s understood what everything means. But perhaps the part that sticks out the most, at first anyway, is that the magicians will fail. Fail? That’s not very encouraging. But fail at what? That’s another matter entirely, and it’s not answered until the end of the book because they certainly succeed at many other things.

Some tips to remember when writing prophecy: the person your prophecy centers around does not have to be a teenager; prophecies don’t have to rhyme (thank you, Mr. Beaver); and prophecies can be illusive and misinterpreted.

When you write a good prophecy, be sure to turn your reader’s expectations on their heads. Allow your characters a chance for speculation and a chance to fail. Not all prophecies revolve around ultimate success, and the characters aren’t always right. What if the chosen one wasn’t the protagonist all along?

Perhaps the most undervalued form of foreshadowing, poetry can tend to be the most subtle if not the most illusive, and it comes in many forms. It doesn’t necessarily have to be a poem either, it can be also be in the form of a song, which is a type of poetry. In fact, this is the most common form of poetry for musicals, including Disney movies. The best example I can give at the moment comes from Frozen. (Particularly because I listen to the soundtrack often, not because it’s the only example.)

The songs are riddled with foreshadowing! In “Frozen Heart”, ice is described as being beautiful, powerful, dangerous, and cold, like Elsa. And at the end of the song, the ice-harvesters sing, “Beware the frozen heart”, and after watching the movie, audiences can get the sense, they’re not just talking about ice but Anna’s frozen heart.

Similarly, in “For the First Time in Forever”, there are two particular predictions Anna makes, one of which comes true, and the other does not. First, she sings, “For the first time in forever / I could be noticed by someone.” But it’s not the someone, the romantic interest, that she thinks. Yes, she meets a guy, but she’s also noticed, for the first time in years, by her sister. Secondly, at the end of the song, she concludes with, “Nothing’s in my way!” To which my sister and I would say, “Yeah, except for Hans,” in which he literally stands in her way, foreshadowing the treachery to come.

Other great examples of poetic foreshadowing include The Lord of the Rings, of course, and The Phantom of the Opera to name a few. Some tips on writing poetic foreshadowing: it doesn’t have to rhyme; be subtle; it’s okay to be obscure; remember to use lots of imagery. 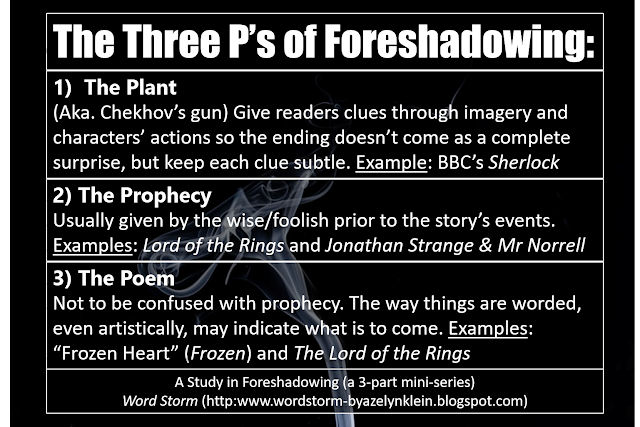 Just remember the three P’s of Foreshadowing, read a lot, write a lot, and you’re one step closer to utilizing great foreshadowing.


Let’s chat! Which of the above methods for foreshadowing is your favorite? Which story have you encountered with the best foreshadowing?
Posted by Azelyn Klein at 2:10 PM