I’m adding to my regular blog posts! Surprise! Okay, for some of you, it’s not such a big surprise. I’m addicted to writing. Send help. No, really. Please don’t. I’m perfectly fine with the itch to put down words and stories and characters who won’t leave my imagination alone. Last year I added poetry, which was a success! Thank you, my dear readers. (I’ve added a whole page dedicated to poetry just for you). This year, I’m adding posts on the different types of fictional characters.

But I won’t just be discussing heroes and villains, love interests and mentors. No, it’s time to get more specific and include some wonderful examples. Anybody up for a session of fangirling/fanboying over your favorite fictional characters? Here we go! 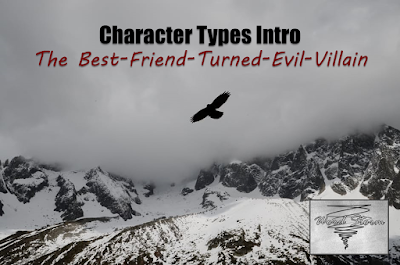 Caution: because of the nature of this post, discussing characters, some attributes may be spoiled for the audience, though I have done my best to select well-known characters that people may already be aware of. Spoilers are specific to Captain America: Winter Soldier and Harry Potter and the Prisoner of Azkaban.

The Best-Friend-Turned-Evil-Villain, here on referred to as the BFTEV. (Is it just me, or is that pronounced bef-tev in your head?) You think you know them. The hero and their friend have been on many epic adventures together—or ordinary ones depending on the genre. They have inside jokes, secret passwords, and great stories. They share a particular bond common among best friends. I mean, you can relate to their friendship so much! Then they stab you in the back. What’s not to like?

Often times, this is either the character who was captured and brainwashed and/or manipulated. Although there are several characters I could list, I’ll stick with using Bucky Barnes as my primary example. He’s Steve Roger’s best friend. He was always there to get Steve out of trouble, but now he’s trying to patch his memory back together while running from various governments because Hydra turned him into one of the most notorious assassins.

Even when it means dying or fighting against his own team, Steve sticks to the catchphrase he and Bucky have, “I’m with you to the end of the line.”

Okay, so I listed Bucky as a likeable BFTEV, but that doesn’t mean everybody likes him. My sister surely doesn’t, but that’s because she’s team Iron Man. While not every BFTEV may be likeable, if they show up in a story, brainwashed, I find it really difficult to hate them despite their despicable actions because I know it’s not who they really are.

Then there’s the slimy best friend who turns into a villain either out of fear or greed or whatever motive and nobody likes him/her for it; aka the traitor. Unlike the likeable BFTEV, the unlikeable one is skilled with manipulating others and may even make some of his friends out to be villains. Take Peter Pettigrew for example—he betrayed James Potter, blamed Sirius for his crimes, and faked his own death. Nobody likes an outright traitor. Not even the villains they side with.

Finally, there’s always that character who people think is the BFTEV but actually wasn’t all along because the other characters confused their motivations. Take Sirius Black for example. He’s not a true BFTEV; he’s not a villain at all. But for years, everybody thinks he is. Maybe that’s why he’s one of my favorite characters. Unlike some villains, he truly is misunderstood. The mistaken BFTEV is a great illustration that jumping to conclusions about a person’s character before you’ve examined all the facts is never a good idea.


The BFTEV is one of my favorite fictional character types. I like the conflict, but more than anything, I like the potential for redemption and reconciliation.

Literary references: J. K. Rowling’s Harry Potter and The Prisoner of Azkaban and the Sorcerer’s Stone.


Let’s chat! Who’s your favorite BFTEV? What type of fictional character do you want to read about next—the Pessimistic Mentor, That Guy Who Just Won’t Die, or somebody else?
Posted by Azelyn Klein at 10:00 AM