Last of the Memory Keepers series: The Five Races Q&A and Giveaway!

“Years ago after our world began, we murdered the human race. Now we’re all that’s left.” –Rhona Farlane, “The Diplomat’s Daughter”(LMK series, vol. 1)

I had a lot of fun in brainstorming ideas for the races in Last of the Memory Keepers. Though some of them took me a while to develop. The Diataro, for example, were nameless for several drafts until right before I sent my novelettes off to my editor. But I still put a lot of work into developing their cultures. Unfortunately, not every detail went into the stories, as often the case with characters’ personalities and the world’s history.

I’ve also written a short page on The Five Races, which you can check out, but here’s a quick refresher with a couple facts not mentioned in the stories. 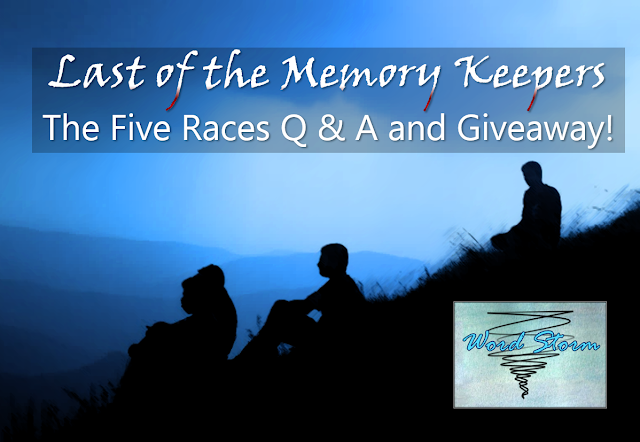 Disclaimer: While I have listed some Earthen influences for the five races, they are not meant to be representations of actual people groups. Any inconsistencies between cultures is because the races in Last of the Memory Keepers are not the races we have in our world today. Similarly, one of the primary themes of the series is that no race is strictly good or evil and that culture and race do not define a person.


Gift: The most history-oriented of all the races, the Memory Keepers have the ability to access, alter, and store memories within humans, long-lasting plant life, and some animals.
Four types of memory accessing: Deep Memory, Recent Memory, Memory Communication, and Memory Restoration
Earthen influence: Native Americans and English/Scottish names
Primary religions: Monotheism and animism
Currency: bargaining system
International relations: trade with the Meridians


Gift: Just as their name suggests, the Shape-Shifters have the ability to change their form, from minor alterations such as hiding a scar or changing their hair color to appearing like a member of another race or another species entirely.
Types of shifters: Fact-based (can shift into something they have seen and studied) and Imagination-based (can shift into something based of their imagination)
Earthen influence: Russians and Germans
Primary religions: monotheism and atheism
Currency: gold standard
International relations: poor/nonexistent


Gift: Before the destruction of their capital, the Lightning Wielders were the leading race with the ability to wield lightning not only for defense and attack but also for electricity and technological advancement.
Three types of lightning wielding: Energy gatherer (puts energy into Lightning Stones from outside sources), Energy transferrer (transfers energy between Lightning Stones and outside sources; most common), and Energy consumer (uses energy to sustain themselves; rarest)
Earthen influence: Persians and Arabs
Primary religions: monotheism and polytheism
Currency: gold standard
International relations: extinct


Gift: Although not immortal, the Meridians are the longest-lasting of all the races, with an average life expectancy of 240 years.
Earthen influence: Ethiopians and European monarchy
Primary religions: polytheism
Currency: gold standard
International relations: trade with the Memory Keepers, border skirmishes with the Diataro


Gift: The strongest of the races, the Diataro have strength three times that of the other races.
Clans: Taro (largest, warrior society), Jiro (second largest, warrior society), Saburo (smallest, intellectual society)
Earthen influence: Japanese
Primary religions: polytheism and animism
Currency: gold standard and bartering
International relations: all three clans are at war with one another, the Taro and the Sabura raid the Meridian borders, tension between the Taro and the Memory Keepers

Now onto the Q&A. A few of you asked, and I’m here to answer!

Who is the “world power” of the five races?

In terms of manpower and technological advancement, the Diataro are the strongest. Not only are they physically stronger than the rest, but they are also the most intellectual. However, before the destruction of their capital, the Lightning Wielders were the most powerful, being the center of world-trade and technology, as they invented their own type of electricity and communication system based on their Gift.

If the Memory Keepers know the memories, why do they not always identify the bad guys?

In the interest of avoiding spoilers, I will say this—the Memory Keepers are not perfect. They cannot “screen” every person they come across, even during a diplomatic meeting. Some races, particularly the Diataro, would find the keepers accessing of their personal memories to be offensive and intrusive.

Do the races intermarry? What would happen if a person had all five Gifts?

Mostly, the races keep to themselves, but occasionally there is intermarriage. The more Gifts a person has, the more diminished their abilities come. Not only is their skill set divided, but their Gifts are diminished. People of four or five races usually show little to no ability of Gifts. Rumor has it that because of their “disability”, they are actually closer to being the ideal human being, as the first humans had no Gifts.

Which ability or strength unique to the five races would you (Azelyn) want to have? –Faith Boggus @ A Boggus Life

Ooooh, I would have to say the ability to access memories, not that I’m biased or anything. Although I am not as big of a history-fan as Rhona, I would probably be a Memory Communicator like Ellard. But instead I would use my Gift to tell stories. While the Memory Keepers do not write anything down (no books! *gasp*), they have an ancient oral tradition, and storytellers play a large part in their culture.

The next story, “The Sun Child” (LMK series, vol. 3), comes out May 5, this Friday! And next Sunday, I’ll be posting the companion poem, “Luan and the Star’s Daughter”. In celebration of your visit to my blog, I’ve added a special giveaway! Enter to win three e-books of your choice from the series (vols. 1-3 OR 4-6). Three winners will be selected and contact via e-mail. Enter below:

Let’s chat! Have you read any of the Last of the Memory Keepers series yet? Do you have any questions about the races that weren’t answered here? Which of the five would you want to be?
Posted by Azelyn Klein at 12:00 PM