Character Types: The Emotionless One

If you’re wondering why I haven’t posted the past two Sundays, you can read all about my reasons in my latest newsletter for last Sunday (River of Books; sign up for the Word Storm Newsletter here!). This Sunday, I was having technological problems. I couldn’t connect my computer to the internet at all.  Now, I’m back! *waves*

I hope you are having as much fun reading these character posts as I am writing them! They may be challenging thus far, but I really, really, really like character analysis. This week, I’m here to talk about yet another one of my favorite characters—The Emotionless One. They may not be the easier character to empathize with considering they tend to be absolute jerks, but they’re simultaneously fascinating.

Note: The Emotionless One is not to be confused with The Brooding Boyfriend or The Compulsive Liar, though they may overlap at times. 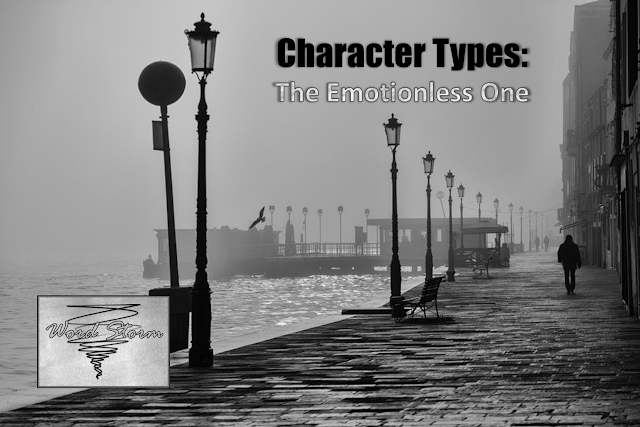 “‘It must be because you’re so approachable,’ I say flatly.
‘You know. Like a bed of nails.’”
(Tris, Divergent)

A few examples of The Emotionless One include but are not limited to Sherlock Holmes (Sherlock Holmes collection by Sir Arthur Conan Doyle), Spock (Star Trek, the original series and the latest movies), and Jahan, son of Elam (Last of the Memory Keepers by yours truly). Here are just a couple of the traits they tend to exhibit.

Okay, before you start telling me that’s just an excuse, here me out. A lot of times, people—even readers—jump to conclusions before they get to know a character. One of the main reasons Sherlock didn’t have a lot of friends (aside from the fact that he was a jerk) is that few people took the time to really listen. Mrs. Hudson needed boarders, and Lestrade needed Sherlock’s help, but it wasn’t until John took the time to listen that Sherlock found a best friend.

They tend to lack social skills.

Sherlock can deduce a person’s occupation and personal habits but doesn’t always recognize when he’s being cruel. Jahan is perhaps the exception, as he can empathize well with other people.

Bones: You could at least act like it was a hard decision.
Spock: I intend to assist in the effort to reestablish communication with Starfleet. However, if crew morale is better served by my roaming the halls weeping, I will gladly defer to your medical expertise. Excuse me.

John: But it’s the solar system!
Sherlock: Oh! How? What does that matter? So we go ’round the sun. If we went ’round the moon or round and round the garden like a teddy bear it wouldn’t make any difference. All that matters to me is the work. Without that my brain rots. Put that in your blog. Or better still, stop inflicting your opinions on the world.
(Sherlock, “The Blind Banker”)

They’re incredibly smart in some areas.

Sherlock can deduce a lot in one glance and only takes cases that are intellectually stimulating. Spock was accepted to the Vulcan Science Academy (yet declined admission), designed the Kobayashi Maru test, and even quotes Sherlock Holmes. And while Jahan may not express emotions, he is good at discerning them.

Sherlock: What is it like in your funny little brains? It must be so boring!
(Sherlock, “A Study in Pink”)

A recent trend within the film industry has been to give The Emotionless One at least one instance when show some form of extreme emotion. Sherlock is often overprotective of John; Spock nearly strangles Kirk; et cetera. While many of these extreme displays of emotion from The Emotionless One are often criticized, that doesn’t mean these characters are completely unfeeling.

However, while Sherlock may have been overtly emotional in the BBC adaptation, there is only one instance that comes to my mind when he showed fear in the books after John got shot. Spock, on the other hand, is half-human, half-Vulcan, giving him some of the characteristics of both. Likewise, most of Jahan’s reactions are internal.


Sarek: Emotions run deep within our race. In many ways, more deeply than in Humans. Logic offers a serenity Humans seldom experience. The control of feelings, so that they do not control you.
Spock: You suggest that I should be completely Vulcan, and yet you married a Human.

Sarek: As ambassador to Earth, it is my duty to observe and understand Human behavior. Marrying your mother was logical. Spock, you are fully capable of deciding your own destiny. The question you face is: which path will you choose? This is something only you can decide.

Anybody else notice what else I might have described in this post? And before you say a psychopath or even a high functioning sociopath, think really hard.

If you picked autism, you would be correct.

However, it’s important to differentiate between the terms and their characteristics. Personally, I would not label autistic characters as emotionless. They may process emotions differently, but they are far from unfeeling. If anything, they feel deeper than others.

Often times, the main issue with The Emotionless One is that they’re just labeled emotionless without the author really delving into why. When Doyle wrote the Sherlock Holmes stories, autism was relatively undiscovered, so we may never know if his famous detective was autistic or sociopathic. It doesn’t help that Doyle really didn’t care about accuracy either. While the modern BBC adaptation tries to explore the traits of a high functioning sociopath, it’s not entirely accurate. There’s even one point where John suggests Sherlock has autism. I’m sorry, but pick ONE. They are not the same.

When writing or examining The Emotionless One, there are generally different reasons for their lack of emotion:

1) Their mental processing is different.

·       E.g. Sociopaths.
·       E.g. Vulcans. As a nonhuman race, the Vulcans think in a very different manner from the humans. As a result, they often come across as being arrogant and emotionless. Their traits are also cultural (see below).

·       E.g. Germany. Believe it or not, the Germans often come across as very stoic. They’re seen as lacking in a sense of humor and being incredibly critical because they state things the way they are.
·       Lightning Wielders. In their culture, showing emotions to people outside of their immediate family and/or close friends is considered very rude. Hence, Jahan comes off having no emotions, until he befriends Rhona.

Rhona: “I am not emotional.”
Jahan: “No. You’re passionate. There’s nothing shameful in it.”
(Last of the Memory Keepers)

·       There are many different reasons for hiding emotions, the primary one in fiction being a survival technique. In some cases, showing emotion can be seen as a sign of weakness, so as a defense mechanism, the characters learn to adapt. Developing a poker face can also be a helpful trick for con artists and thieves.

Other examples of The Emotionless One not discussed in this post include Tempi (The Wise Man’s Fear by Patrick Rothfuss) and Wong (Doctor Strange). Such characters are perhaps some of the most difficult to understand, which only makes them more fascinating.

Related posts: The Pessimistic Mentor and The Character Everybody Detests

Let’s chat! Who is your favorite emotionless character? Which do you think could have been written better? Which of the three reasons for a “lack of emotion” would you like to see more in fiction?
Posted by Azelyn Klein at 10:00 AM

Email ThisBlogThis!Share to TwitterShare to FacebookShare to Pinterest
Labels: Character Types, Emotionless Characters, The Emotionless One