No Story is Perfect

I go through various phases of reading. Some days, I’ll breeze through a really good book and then demand 100,000 more excellent stories. Other days, I’ll read 25 pages of a book I’ve been trying to finish for a week, and by the time I’m done, I don’t want to pick up another book for the next month. Good books are energizing. Mediocre ones are exhausting.

All the while, I keep reading because I’m in search of the next great story. I have this picture in my mind of what such a story should look like, and even books I give 5/5 stars don’t entirely line up with my expectations. Even books I end up thoroughly enjoying and buying because I want to read them again, if I tried hard enough, I could probably find faults with them. It happened with The Chronicles of Narnia, The Valley of Fear, and the Inkworld trilogy and will undoubtedly happen again. 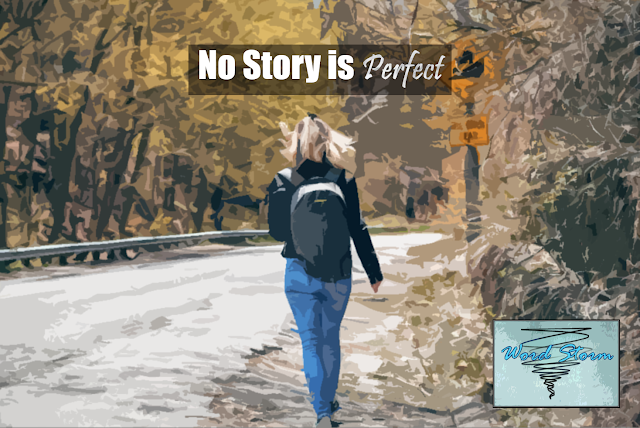 Disclaimer: This post is not meant as an attack on your favorite stories. Therefore, I have picked my own treasured books to analyze and critique as an example. Likewise, when I say “story”, I mean fiction, not nonfiction, though there are certainly imperfections in nonfiction as well.


“It is the mark of an educated mind to be able to entertain a thought without accepting it.” –Aristotle, Metaphysics


I was quite surprised when during my postgraduate, I heard one of my professors criticize Henry V for its awkward structure. Apparently, characters are running around every which way, and how on earth are directors supposed to portray an entire battle on stage through messengers?

“It doesn’t really work as a play,” my professor said.

Wait, what? This is Shakespeare we’re talking about. Isn’t he supposed to be a genius, the standard for writers?

As it turns out, even classics have their faults.

Despite fans’ obsession with the famous detective, Sir Arthur Conan Doyle hated Sherlock Holmes, so much so that he couldn’t even stay consistent with John Watson’s injuries, and there are parts where the third-person narratives don’t make sense. How is Watson supposed to glean this information if the point of view character is dead?

In The Faerie Queene, not only is it difficult to follow the dialogue let alone the narrative, but also the later stories are, apparently, not as well thought out. Though I haven’t read all the books yet, I’ve heard characters disappear from the story if you’re not paying attention. That and Spenser never actually finished the collection. He only wrote six out of his initial idea for twelve books.

The Lord of the Rings reverts to Dues ex machina when it comes to the eagles and the army of the dead. Likewise, The Chronicles of Narnia has some narrative issues. How does the narrator know what to write in The Last Battle if the seven friends of Narnia told him the events of the other books?

I don’t mean to be terribly condescending when it comes to fiction. The Lord of the Rings and The Chronicles of Narnia will still be among my favorite stories from my childhood. Paradise Lost is among my Treasured Books, and I will probably always consider it to be among the best classics.

But there still remains the idea that a story doesn’t have to be perfect for it to be enjoyable. If we didn’t enjoy stories because we dislike one or two aspects of it (or five or ten), we might never find a story we’d like. But that doesn’t mean, just because we thoroughly enjoy something, that we can’t talk about the elements that bothered us. Neither does that mean we have to get defensive if somebody else has a different opinion on a story than we do.

“You can like things and also find them problematic. That is fine.” —Jen Campbell, “Let’s Talk | Villains and Deformity”

But what can readers possibly do when it comes to flawed fiction? First off, acknowledge the problem. Believe it or not, ignoring an issue doesn’t make it go away. Unless it’s a mosquito bite. Then you should definitely try to ignore it. Secondly, discuss the issue with others. Thirdly, and finally, if you’re a writer, address these issues in your own stories. You may not get it all right, but you are human, after all.


Sherlock: It’s not a pleasant thought, John, but I have this terrible feeling from time to time that we might all just be human.
John: Even you?
Sherlock: No. Even you.
(Sherlock, “The Lying Detective”)

Besides, I’d much rather read an imperfect story than a perfect one. After all, who can relate to a perfect life? As a gardener, I can often tell the difference between a fake houseplant and a real one. Fake plants are shiny and perfect and collect dust. Actual plants have scars and sometimes dried tips on their leaves, but at least they’re real.

Related posts: The Movie Was Better than the Book, Every Last Reindeer, and Controversy in Fiction

Let’s chat! What’s your take on fiction and it’s imperfections? What are some stories you enjoy despite their faults?
Posted by Azelyn Klein at 10:00 AM

Email ThisBlogThis!Share to TwitterShare to FacebookShare to Pinterest
Labels: Fiction, Imperfection, No Story is Perfect, Reading Problems, The Ideal Book, The Ideal Story