One of my earliest memories comes from the first time my family and I lived in Germany—of me escaping from my parents, walking on a red carpet, and approaching a gaping castle gate. I can’t recall if these are all one castle or several, but every now and then in the present, I get a glimpse of what I might have seen as a toddler.

Fast forward to the second time I came to Germany during my sophomore year in college. After a quick trip to a local backerei, my parents took my brother and me to visit a couple ruined castles, the first being Reussenstein. Dad kept asking me if I remembered anything, but I didn’t. Then he told me about the time he took my brother and I there when we were kids. I had wandered off, and Dad thought I fell off a cliff. Turns out, I had gone back to the car.

Bleary-eyed and jetlagged, the visit during my sophomore year seemed surreal, touching the stone walls, breathing in the damp air, seeing the layout of the forest and towns below. Four years later, I can’t get enough of ruined castles, and I even have favorites among the ones we’ve been to.

Over those years, I can’t say I’m an expert—does such a thing exist?—but I’ve learned quite a bit. Here are just a couple tips for you writers who may dabble in castling whether it be in real life or in books. 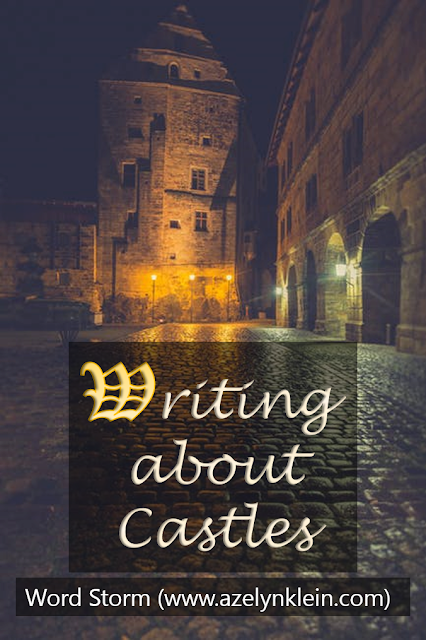 A City within a City

A castle isn’t just an overly fortified mansion with a throne room and a dungeon. More often than not, it’s a self-sustaining civilization on its own, meant to withstand a siege and still be able to carry on with life in times of peace. As such, most castles would contain everything from a barracks and weaponry to a chapel and kitchen.

The three main parts of the castle include the outer wall, the courtyard, and the keep. Once you have those parts, it’s easier to establish where the other rooms are. And one of the things I’ve found about most European castles—at least the ones that are still intact—most of them are not set up like an American hotel. In other words, they don’t always have a nice little hallway right outside all the rooms allowing for a structured layout. Instead, most of the rooms are adjoining.


Size matters when it comes to castles, particularly when it comes to building costs and upkeep. Smaller castles are easier to maintain but may be harder to defend whereas larger castles require greater costs to maintain and are harder to attack. Likewise, the style and material of the castle will often depend on where it’s built. Many older castles are assembled with the local stones, giving the building a more rugged look, while more recent castles appear more finished and may have imported stone.

Also, as much as I’m a fan of Lord of the Rings, I always wonder how Minas Tirith was maintained by a country that barely managed to fight off the forces of Mordor. Seriously, where did all the resources come from? Edoras (even though it’s more of a walled city) and Helms Deep, on the other hand, seem like more realistic and sizable castles.


Movies tend to make castles look much larger than is practical. Castles were and continue to be incredibly difficult to maintain. Not all ruined castles are in ruins today because they were attacked. Some fell into decay because they were abandoned. Other castles, like Schloss Neuschwanstein, were built at a later time for decoration and for their architecture, nearly bankrupting the country, rather than for practical defense.

In the Palace of Rygia actually addresses this point when one army uses left-handed swordsmen in their attempt to infiltrate the castle.

One of my pet peeves in films is when they don’t care about how towers are structured when in fact, they are one of the biggest defensive points if the castle is breached. (Sorry Beauty and the Beast fans, but nobody builds towers with stairways going both directions.)


Of course, there are exceptions. If a particular point needs to be defended from below rather than above, a stairway may curve to the right instead of the left. I’ve seen maybe one or two stairways that are the exception, such as the one in Neuschwanstein (maybe King Ludwig II was left-handed?).


Good news! Secret passageways aren’t just found in stories. They also exist in real castles. The castle in Nottingham, England happens to have a tunnel because there are a lot of caves in the area, and sandstone is great for carving out tunnels. Likewise, Burg Hohenzollern (Germany) has a secret passageway that leads from the courtyard to the outer wall. Even Schloss Linderhof (Germany), which is more of a palace than a castle, has a hidden door (which isn’t actually very hidden because the tour guides insist on pointing it out).

Before I visited Europe, I thought castles could be built anywhere. Turns out, they’re usually built in places with strategic advantage.

In southern Germany, with all the surrounding hills, castles are located above local towns, giving the castle the ability to see approaching enemies and making it difficult for them to approach the castle at all.

However, English castles don’t always have the advantage of steep hills and gaping cliffs, but they do have another advantage—water. The Tower of London, for example, used to be protected not only by its thick walls but also by a moat, before it was drained around the 1830s.

Just a couple of points on defensive points: rounded towers are better than ones with corners because there’s nowhere for enemies to hide. Gaping windows are not practical or defensible for outer walls.


“Ah, Frodo, Erebor! Built deep within the mountain itself, the beauty of this fortress city was legend. Its wealth lay in the earth in precious gems hewn from rock and in great seams of gold running like rivers through stone.” —Bilbo Baggins, The Hobbit: An Unexpected Journey


If your story is set in a fantasy world, you have to take mythical attacks into consideration as well as human invaders. For example, a stable with a thatched roof wouldn’t stand up to dragon fire as well as one with tiles or rock shingles. If the story has magic, protective shields or cloaking could can come in handy.

But if you’re going to build a defensible fortress that can protect your characters against dragons, please, please, please don’t just include the ever-so-convenient pillar for said characters to hide behind. It’s overdone, annoying, and appears in nearly every dragon movie (The Hobbit: An Unexpected Journey and Desolation of Smaug, How to Train Your Dragon, etc.). I’m pretty sure that if somebody hides behind a pillar and fire is nearly enveloping them, they’re going to end up with at least second-degree burns (How to Train Your Dragon 2 partially addresses this problem with exposed characters).

Know Your Era, Know Your Culture

If I could say any point is the most important, it would be this one. For every rule, there’s almost always an exception. And castles tend to vary from country to country and even from year to year. Castles with rounded towers tended to come after ones with square towers.

Don’t just read this post. Do further research! Especially if you’re writing about a real castle. If you can, visit the place or talk with somebody who has. Study the landscape, the architecture, the culture.

A couple fictional books set in or near actual castles include The Merry Adventures of Robin Hood and The Raven Master’s Secret.

If you’re making up a castle of your own, you have a little more freedom but be sure to take the time to make it feel like a real place. A couple books with well-written fictional castles include The Alliance Series, The Books of Pellinor, Prince Caspian, and the River of Time series.

Let’s chat! What’s your favorite fictional castle? How about your favorite real castle? Have you ever visited a real one? For those who have been castling, which do you prefer, castles intact or castles in ruins? And writers, how would you go about defending your castle from dragons?

Enjoy this post? Be sure to sign up for the quarterly Word Storm Newsletter! The next newsletter features yet more castles, specifically castles in ruins, and a FREE e-book.

Similar posts: Writing about the Ocean, Character Development vs. Character Roles, and Why Writers Should Study Their Craft

Film references: Tangled, Lord of the Rings: The Two Towers and Return of the King, Beauty and the Beast (2017), The Hobbit: An Unexpected Journey and Desolation of Smaug, and How to Train Your Dragon 1 and 2.