The Movie Was Better Than the Book

Many people may recall how I tend to rant about movies and the superiority of books. In fact, many of my friends claim I don’t even like movies. This is true to an extent. There are exceptions. Sometimes, the movie is better than the book.


Now before you condemn me for heresy, please allow me to propose a couple questions. Do quality movies exist?  And do poorly written books exist? If you answered yes to either of these questions, might it be possible that these two coincide? 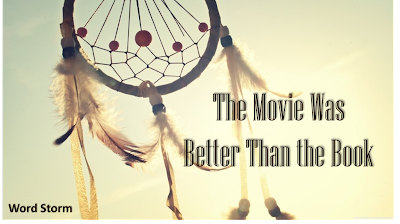 In my experience, there are three general reasons why some movies may be better than their books, and they may overlap in some circumstances.

1) The movie was better researched than the book.

You don’t usually see these kinds of books, but they exist. In these cases, the book falls short of enriching details whereas the movie fills them in. And I’m not just talking about setting. A well-researched story should include culture, setting, time period, and character development just to name a few aspects. Sometimes movies include cultural aspects or languages that the books skims over.


A great example is Dances with Wolves. I enjoyed the movie for the development of the Sioux culture and language, not to mention the music, but when I read the book, I was disappointed. The Indian language was mentioned, but none of the words were included like in the film. Likewise, the characters had more depth in the movie than the book. Though this may seem unusual, this was the case.

2) Writing was not the author’s main talent.

As a reading challenge from a friend, I read Collision Course by William Shatner. Despite being a Star Trek fan, I had no idea who the author was until halfway through the book. (This is because I know more character names than those of actual people.) Ultimately, the name of the author had no impact on my low rating for the book.


Some people make good writers. Others don’t. And sometimes people who are better at something else, end up writing poor books. Just because a person can write a book, doesn’t mean he/she should. It takes more than a big name to make a book successful. Often times, writing is 99% dedication and 1% talent. Dedication gets the work done, but talent makes it effective. Some authors’ talents lie elsewhere instead of with writing.

3) The book was based off the movie.

Basically, I’m not a big fan of fan-fiction. I’m a firm believer in the original writers getting the credit for their fictional worlds because they came up with the ideas. The main reason that some fan-fiction falls short is because readers cannot draw from the same experiences that the writer has already drawn from.


This is not to say that fan-fiction is completely worthless. Writing fan-fiction may be a fun writing prompt activity. Some writes may even manage to capture a character’s essence and an author’s style. But this is rare. Besides, there are plenty of books I wish people would write a based on movies and shows, such as Ladyhawke or Leverage, but that’s another story.


So, though many readers may discount the value of film in appraise of the written word, there are some cases, rarities, that a movie might actually be better than the book. Ultimately, neither books nor movies can be a perfect form of culture, and audiences may prefer one over the other. But if readers are going to claim to be avid, it’s important for them to tell the difference between a good book and a poor one.


Are there any book-to-movie adaptations where you considered the movie to be better? Why/why not?