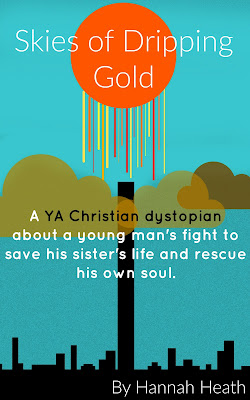 
I know it’s not a novel, but all the novels I have been reading lately are in the middle of a series. And as much as I enjoy series, and I hope you do too, I don’t usually post reviews for sequels on my blog. That being said, I’d started following Hannah Heath’s blog a couple months ago, and if you’re a writer, you should definitely check it out! Anyway, Heath did such a good job promoting “Skies of Dripping Gold” recently that I just had to read it.
I was really impressed. Heath presents a typical dystopian society with relevance to situations today. Instead of your typical, catastrophic “the world is ending!” dystopian, this story is up-close-and-personal with the lives of the characters, Gabriel, Lilly, and Cole.

Told from Gabriel’s perspective, the world seems hopeless. Or at least it would be without his older sister, Lilly. The way that Gabriel desperately cares for her reminds me a bit of C.S. Lewis’ The Great Divorce. And Gabriel’s emotions are so real that I could easily picture the story and feel his pain along with him.

Without giving too much away, one of the main themes of the story is how a good God could exist in a world with so much pain. I appreciate how Heath handles such an issue without resorting to deus ex machina.

Another quality I really enjoyed was Heath’s writing style, which is typical of YA. Here’s one of my favorite lines:

“As far as Gabriel was concerned, there were only two all-important laws on earth:

2. Never swear in front of Lilly.”


I gave this story 4/5 stars for its well-told narrative but some vague descriptions. But because this is a short story, I recognize that there is only so much a writer can do with a limited amount of space. Because of the instances of profanity, I’d have to go with Heath’s own “rating” and recommend it to anybody older than 13. I look forward to reading more stories from Heath.
Posted by Azelyn Klein at 10:00 AM