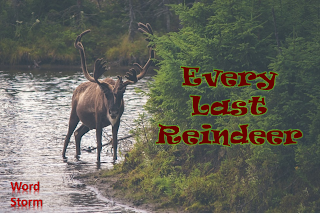 (Caution: This post contains spoilers for Rudolf the Red-Nosed Reindeer and It’s a Wonderful Life. If you haven’t seen the latter, go watch it now! You won’t regret it.)


I’ve never cared for the story of Rudolf the Red-Nosed Reindeer. Sure, I felt pity for the poor creature who couldn’t help how unique he was, but I always hated the other reindeer. And please, don’t tell me this story is remotely realistic in the sense that it reflects life. All the reindeer loved Rudolf in the end? Every last one? None of them harbored any form of envy after the way they treated him throughout the story?


Perhaps what irritates me most is how it took a giant act of revelation, of purpose that made the other reindeer recognize him. In other words, Rudolf was an outcast in his society until he proved himself to be useful. It took a dramatic, historic event, to wake up the reindeer, but it shouldn’t have happened that way. A similar situation can be seen in Happy Feet. Should characters ONLY be recognized for fantastic, world-saving deeds instead of their good, everyday qualities?


If this is the case, how should characters that are seemingly useless be handled? Say, for instance, there’s a boy who’s a little different and gets picked on for it. He barely manages to scrape by with passing grades in school. He doesn’t make it rich and can’t contribute something society would consider useful. But maybe he’s kind, and his friends recognize this.
The moment stories ONLY praise a character for what he/she does instead of who he/she is inside is the moment stories miss the point. After all, what do infants contribute to society other than joy and potential for the future? Likewise, characters who value usefulness over integrity are vulnerable to resentment.


I should know. In high school, I never fit in and was angry with some of my peers for excluding me because I was the “shy kid.” One day, we were talking about having a reunion in the future, and my thought was, “I can’t wait! I’ll be a published author by then, and then you guys can finally recognize me for who I am.”


Since then, I’ve only published a couple short stories, and I’ve learned not to place my value in my accomplishments. Because in the end, it’s not what I’ve written that my friends and my family will remember, but how I treated them.


Perhaps one quote that embodies my point is what Gandalf told Galadriel in The Hobbit: Desolation of Smaug:

“Saruman believes it is only great power that can hold evil in check, but that is not what I have found. I found it is the small everyday deeds of ordinary folk that keep the darkness at bay—small acts of kindness and love.”

Bilbo Baggins may not have single-handedly liberated Middle Earth, but he cared for his friends. The same can be said of Sam, Merry, Pippin, and countless other characters. These characters aren’t just remembered for the contributions they made but how they cared. Besides, if Pippin was merely remembered for every mistake, nobody would like him.


Another good example of less-than-epic proportions but with spectacular plot is It’s a Wonderful Life. George Bailey had dreams. Dreams so big that he was bound to become a great success, right? But just because he didn’t go on to build skyscrapers like he planned or save hundreds of soldiers like his little brother Harry or become filthy rich like Sam Wainwright, he was still one of the most beloved characters because of the way he treated people.


So this Christmas, may we find contentment not just in the spectacular but in the ordinary. May we care like Bilbo Baggins and George Bailey. May we love like Jesus. And it’s just like Clarence said: “Remember, George: no man is a failure who has friends.”

Movie references: Rudolph the Red-Nosed Reindeer, Happy Feet, The Hobbit: Desolation of Smaug, and It’s a Wonderful Life.
Posted by Azelyn Klein at 10:00 AM

Email ThisBlogThis!Share to TwitterShare to FacebookShare to Pinterest
Labels: Christmas, Cultural Misconceptions, Outcasts vs. Heroes, Reindeer, Use vs. Value