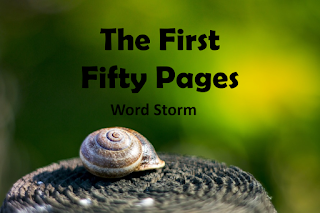 So, you might ask: How do I decide if a book is good enough to read? Well, typically, there are three ways I find a book to read: 1) it’s required reading for class (I’m an English Literature major), 2) it was recommended by a friend/author, or 3) I stumbled upon it online and read reviews. Sometimes the book’s cover may make me want to buy it even more. That’s right. I said it. Not the title. The cover.

Once I have the book in my hands (usually I borrow it from the library unless I trust the author/recommender) I may or may not read it, but I don’t base it on the first five pages but the first thirty pages. If a story doesn’t pick up after then, I may get bored and return the book, or I may continue just to see if it ever does pick up. (I once got two thirds of the way through a boring book and finally put it down when I realized it would never get better.)

Perhaps I’m not as overwhelmed by curiosity as other people. Until I actually care about the protagonist or other characters, mere curiosity isn’t enough. (This is why, until recently, it was literally an impossible for me to get through the Mission Impossible movies. Somebody just died in the first five minutes? Who was that anyway?)

With the books I pick up, I will read the first three chapters or the first fifty pages before I decide whether or not it is worth reading. By then, I will have some idea who the characters are and if they are worth spending 300+ pages with.

While books may be competing with movies for people’s attention, most people who intentionally sit down to read a book are likely have longer attention spans than those who don’t read at all. Sure, there are reluctant readers, and I applaud authors who write books for them. Rick Rordan’s Percy Jackson and the Olympians is an excellent example of a series specifically geared to children/young adults with a short attention span.

Nonetheless, plenty of classics exist that don’t suck readers in from the first five pages. Take the Lord of the Rings, for example. It took me almost an entire year to read The Fellowship of the Ring because I took month-long breaks between chapters. Right now, I’m still struggling through the Silmarillion. And this is coming from an avid Tolkien fan who has LotR marathons at least once a year and could never choose between Middle Earth and Narnia.

Similarly, I don’t remember the opening lines of The Book Thief or Inkdeath. And neither of these books were particularly fast reads. But they are stories I enjoyed over a longer period of time.

Ultimately, I don’t read all books because they are fast-paced adventures (though some portions certainly may be fast-paced). I tend to read books because they have quality. While having a gripping opening to a book may help in some cases, it is not the end-all-be-all in a quality literature. Some days, I want a book that will grab my attention by the first chapter and hold it to the end, and other days, I’ll sit down to enjoy a story over the course of several days. That’s when I’ll read the first fifty pages.

How long does it usually take you to decide whether or not you’ll read an entire book? What are some books you enjoyed despite the opening pages/chapters?

Literary references: Rick Rordan’s Percy Jackson and the Olympians series, J.R.R. Tolkien’s The Lord of the Rings and The Simarillion, and Markus Zusak’s The Book Thief, and Cornelia Funke’s Inkdeath.
Posted by Azelyn Klein at 10:00 AM