I’m currently recovering from writer’s block. You may not have noticed because, after all, I’ve managed to keep up with my blog posts, I somehow scrounge up 3,000 words for my not-so-secret writing project every Sunday, and I sporadically come up with several poems a month. How does this constitute writer’s block again?

Let me just say it’s a slightly different block from ones I’d experienced before. 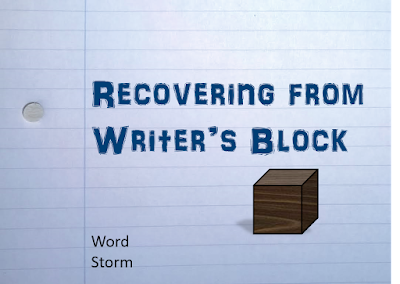 My sophomore year as an undergraduate, I have no recollection of writing anything. I don’t know how this was possible, but I don’t remember daydreaming either. The next year I remember getting bombarded with ideas, and no, they haven’t stopped. The summer after I finished a novel, I had no idea what to write next. I floundered and wasted two months watching movies and hanging out with family.

How was my most recent writer’s block different? It came from querying literary agents. I’ve never done that before.

And with the process came lots of self-doubt. Questions I hadn’t asked in a while resurfaced: What if my story isn’t good enough? What if I never get a book published? Did I just waste two and a half years on a story and get my hopes up for nothing?

And some terrifyingly new questions arose: Why should I waste more time working on a sequel if the first book never gets published? What if I wrote the book I wanted to read at the time but my reading style has changed? What if I’m not the writer I want to be?

That was it, I realized. I’m not the writer I want to be. The very idea that anything and everything I was writing right now is not what I want to read turned into a sort of dread. Near the beginning of March, I texted a friend and told her I didn’t want to write.

I didn’t want to write.

I didn’t want to write because I didn’t have any confidence in my own words. But even as I experienced the crushing feelings of doubt and fear that I would never accomplish anything as a writer (I have a blog. Hello, self-doubt. Are you listening yet?), I came to terms with the idea that I don’t have to accomplish everything right away. And that’s okay.

Because I still want to be a writer.

I may not be the writer I want to be yet, but I still have ambitions. I want to become a better writer. I want to get published. Hey, I’d even like to write a detail-rich 800-page book someday. Crazy, right? But I still have dreams, and while it may be a while before I see them come to fruition, that’s okay too. Even if I don’t see a book published of mine until five years from now, I think I’ll have done alright.

Even after I texted my friend halfway through the week, venting about how I didn’t want to write and was drowning in self-pity, come Sunday I wrote. I wrote a lot. Having gone through writer’s block countless times before had taught me one thing: self-doubt is no reason to give up. The best cure for writer’s block is to write. Even. If. The. Words. Are. Crap.