The ocean holds a dangerous beauty as well as a certain place in my heart. Back when I was in high school, we lived in Hawai’i for three years. And to fight off the dreaded island fever, a stir-craziness that mainlanders tend to get living on an island for so long, we visited the ocean often. My dad’s favorite thing to do was go SCUBA diving, somewhere between three to five times a week so that Mom often called herself a dive widow. I was never certified, having a certain fear of heights, and liked to go snorkeling and boogie boarding (aka. bodyboarding; it’s like surfing without standing up). 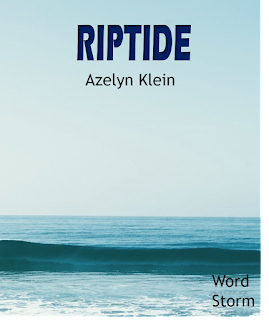 No matter what we were doing in the ocean, we still experienced many of its dangers in addition to its joys. I have vivid memories of getting caught by a particularly strong wave while boogie boarding and being slammed into the sandy bottom. It wasn’t a pleasant experience. Other times, Dad told stories of diving where the waves were rough and he and his dive buddies got strafed across the coral and lava rock.


“Flesh versus rock, rock wins every time,” Dad would say when he came home with various cuts. He and my brother still have the scars.


And it didn’t end with lava rock. Dad’s got a story to two to tell about shark encounters while he and my brother were out spear fishing. Then there were sea urchins incidents, eel bites, and jellyfish stings. Not to mention the dreaded riptides, which were known to suck people out to sea and tire out the most skilled swimmers.


Dad warned us and told us if we were ever caught in one to swim parallel to the shore because the tides are rather narrow. Thankfully, none of us were ever caught in a riptide. So while part of this poem is pure speculation, most of it is experience. But it’s only a glimpse: one picture of a collage of memories. The ghost crabs are only one of the many creatures of sea, selected for their resilience against the waves and habit of shuffling sideways. Perhaps another day, I’ll write about zebra urchins and wolf eels, pencil fish and parrot fish, slipper lobsters and white tip reef sharks. For today, though, I’ll just stick with the elusive ghost crabs. 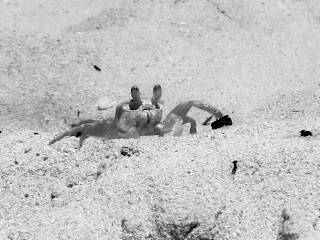 
My toes curl in the tender sand, foaming with saltwater,
bubbling with merriment as the crabs peep their ghostly eyes
over their graves to see the show, then dodging the waves
and digging out their doorways again. Dodge. Dig. Repeat.
As the liquid laps at the shore, like a docile dog panting after a long run,
breathing in a huff, out a slap—a shattering of glass,


I step into the foam, swirling around my ankles then seeping back,
taking me by hand and leading me gently on,
lulling me past the waves slapping my face and stinging my eyes.
Out here in the freedom of floating, my senses are alive—
my nose burns with the wrong breath, the cough, sputter—heavens,
that hurts!—as my feet leave the sand and kick the swirling sea instead.


Catch my breath and take it in, in, in and, holding my hands up,
down I plunge until my feet meet sand once more,
overturning a molten, frigid floor unlike the satin silk of shore.
My lungs seize—screaming it’s time—but I wait another moment in the silence,
hair sprawled out behind me, pressure on my ears,
fingers grasping at the wide world, the nothingness—
finding freedom in the muffle of liquidity, cradling me in its cocoon.


My lungs protest—the sand in my hourglass has run out. I kick off the bottom,
making for the top, bidding the black abyss goodbye
as I make for the golden rays of sunshine,
cutting through the rippled-roof like a butter knife.
So close yet it feels like ages—if I could just reach the blessèd air.


My face breaks the surface and my disheveled hair drip, drip, drips
in my eyes. I suck in a breath as the sunshine kisses my face.
Breathing deeply, I glance back at the shore and notice the palm trees
waving from a long way off, like the beach decided to fold its towels,
clamber into the car, and drive off without me.


I dolphin dive for the shore, kicking at the air until I sink
and push my way past the water, like parting a crowd,
like a frog, arms extended out, out, out in the murky darkness.
Kick once, twice, and I’m headed for the surface again,
for the shore. But, blinking in the sunbeams,
I’m only further
away.


Lured. Caught. Stranded. I can’t stop up an hourglass with sand
or extinguish sunshine with saltwater, a mirror reflecting his pursed-lip face,
any more than I can strangle or part the Sea. My fingers thirst
for the delicate art of origami. Rock, paper, scissors,
water trumps all nine times out of ten. Best two out of three!
I plunge my hand straight into the wave, cutting like a crab,
shifting along the shore. Becoming the simple spy—
Dig. Cut. Repeat.


The water’s fingers slip and lax, flooding me with relief
like seaweed slipping between my legs. We’re tied now,
the Sea and I, but I’m worn, my arms feeling like
jellyfish, minus the sting—but I don’t have the energy to argue.
For now, I’m free, floating, spinning on my back
as I stare up at the clouds, an ocean of air away.


If I were a bird, I would fly, up, up, up, but no—
I’d rather be a starfish, sprawled out on the shore,
a beached whale, a child spat up by a big fish,
kissing the warm sand beneath my salted lips.
Begin round three, and I stroke, stroke, stroke
towards the shore, until my body breaks past the waves,
welcoming me, wading, staggering, back to the land of the walking.
Posted by Azelyn Klein at 10:00 AM