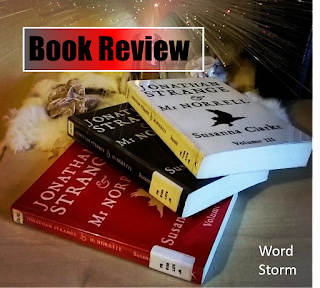 At first, I didn’t know if I would like this book or not. The premise had me feeling a little wary, but I enjoy reading fantasy and felt in the mood for a nice, long book. So I checked this one out from the library. It came in three volumes, making it feel more like I was reading a continuous trilogy instead of a massive, 1,000-page book. (My fingers thank the publisher for this decision by the way; I didn’t experience any of those horrible cramps from holding a heavy book for too long.)

In all, it took me about a week to get through. Although it is not particularly fast-paced, it is rather interesting, and I kept turning the pages wanting to absorb more and more of the story. What I enjoyed most was the writing style. The book had a very English feel, with constant remarks about the weather and the sophisticated nature of scholarship, both of which I can appreciate even more having lived and studied abroad in England.

Likewise, Clarke’s style was quite witty at points and yet practical at others. I particularly enjoyed one scene where Strange is trying to figure out how to move a massive ship that accidentally got beached, he talks through several scenarios with the seamen, much to his confusion with all their nautical terms. Instead of—I don’t know if it would work this way—simply moving the ship, he creates horses out of sand to drag the ship back to sea. Well, I suppose that’s one way to do it!

Another thing I appreciated about the novel was Clarke’s attention to detail. Magic plays a large role in the story, it’s central characters being magicians, but there’s so much more. I’ve never read anything set during the Napoleonic Wars, so it was fascinating to learn more about this time period. Similarly, Clarke includes the impact of war abroad and at home, married life versus a life of single intellectualism, politics, weather (obviously; it’s England), and a particular attention to books.

One particular passage that captures the style and love for books is where Mr. Norrell is invited to a party and, being a scholar devoted to books, finds it a rather awkward occasion:

“He was sick of the noise and sight of so many people and determined to go quietly away, but it so happened that just at that moment the crowds about the door were particularly impenetrable; he was caught up in a current of people and carried away to quite another part of the room. Round and round he went like a dry leaf caught up in a drain; in one of these turns around the room he discovered a quiet corner near a window. A tall screen of carved ebony inlaid with mother-of-pearl half-hid – ah! what bliss this was! – a bookcase.”

Although Mr. Norrell has a tendency to be a miserly, greedy gentleman, it is instances like these when I can’t help but relate with him. But if it came to picking between the magicians Norrell and Strange I prefer Strange, despite the fact that he can be arrogant and mad at times, even deliberately. But I particularly enjoyed the relationship he has with his wife, Arabella.

I would recommend this to readers of fantasy, particularly those who like books, people who love England and history, and/or students who don’t mind long footnotes interrupting paragraphs. While this book may not be for everybody, I’ve been particularly harsh on books this year, and I gave this one 5/5 stars.

For quite a while now, I’d been complaining about not finding the book I was looking for—something fat, something entertaining, and something thought-provoking. Jonathan Strange & Mr Norrell was just that book. I’m only sad it’s over. Now I just have the BBC adaptation to look forward to...

Have you read this book? What did you think of it? If you haven’t, has it made it to your TBR list yet? What’s been on one your favorite books so far this year?
Posted by Azelyn Klein at 10:00 AM