Book Review: Rebel of the Sands

Book: Rebel of the Sands by Alwyn Hamilton

Genre: Young adult, fantasy
Awards: None (Yet. It was just published.)
My rating: 4/5 stars
One-word description: Shiny (Bullets, sand, glints off metal, the desert sun, the book cover. I know, I know, that’s more than one word…) 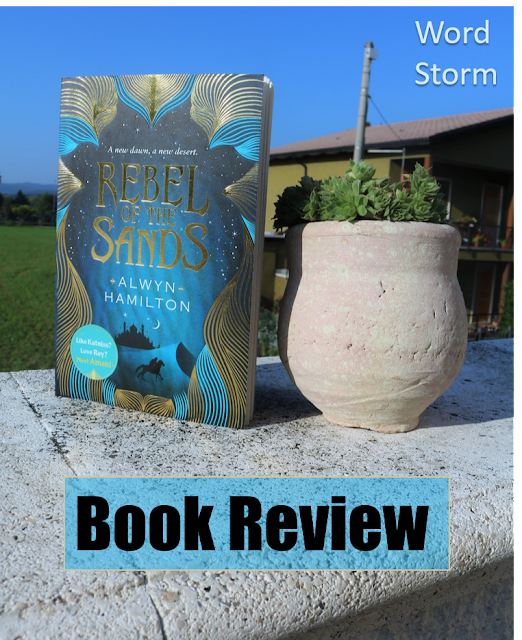 I actually anticipated the publication of Rebel of the Sands, which is something I don’t usually do with books unless they’re in a series, but I read about it on a book blog and thought I’d give it a chance. After it came out, I was too broke to buy it. Then I moved to Italy where I can hardly find any English books. But I finally got my hands on a copy when I visited London with a friend and spent my souvenir money on it. Who needs touristy souvenirs when you can buy books?


I knew I had to own this book because the cover was so pretty. Okay, I know that’s a little vain and I’ve written a post on not judging a book by its cover, but come on. This cover is a work of art! I was hoping the book was just as wonderful, and it was. The writing style wasn’t quite what I expected, but I thoroughly enjoyed it.


Most of the unexpected style came with responses after dialogue that had a colloquial feel to it, but others came during the descriptions of places and creatures, which were great overall. Here’s just one description:

“The furthest away I could ever get was when my mother used to tell me bedtime stories of Izman. Only when my father couldn’t hear. The city of a thousand golden domes, with towers that’d scratch the blue off the sky, and as many stories as there were people. Where a girl could belong to herself and the whole city was so rich with possibilities that you almost tripped over adventures in the street.”


Hamilton is a master of show-don’t-tell and character development. I loved the character development in this book. The villains are human, and the heroes are flawed. Amani is a dynamic character with dreams, a smart mouth, and a bit of an identity crisis. Can we say relatable? Then there was Jin, who’s travelled about as much as I have, and while I may not relate with him nearly as much, his world view has caused me to think about my own.


I also really enjoyed the fantastical elements of the story from the Buraqui (SAND HORSES!) to the Skinwalkers to the Demdji. I’m a sucker for fantasy and fantastical horses and magic. Did I mention magical horses? Okay, so the plot doesn’t revolve around the magical horses, but their presence makes me happy nonetheless.


Yet while the descriptions of most of the fantasy creatures was excellent, with the shape-shifting Demdji, they were vague. I still have no idea what a Roc looks like. My first thought was a bird-like creature. Then I wondered, “Is it a dragon? Wait, nope. It has feathers.” Please excuse my ignorance while I go and Google what on earth this creature is supposed to be…


As for the plot twists, some of them were fairly predictable and others weren’t. In fact, I was so busy watching for one twist, I completely missed the other.


I gave this book 4/5 stars on account of some vague descriptions yet great writing style, dynamic characters, and interesting plot, which felt vaguely reminiscent of Eragon. I was so caught up in reading this book, I hardly gave a second thought to rating it. I’d recommend this book to anybody who likes young adult and fantasy.


The only problem? Now I have to wait for the next book to come out. But I’ve brought this on myself. It’s frustrating, but it’s wonderful all the same, like waiting for Christmas morning. Sometimes the anticipation is half the fun!
Posted by Azelyn Klein at 10:00 AM