The Muse: A Poem

Everybody has favorite small talk questions that they can pull out of their hat at a moment’s notice as though conversations are mere magic tricks to be mastered by a selected few. I don’t know how most extroverts do it. I’ve written on Small Talk before, so I shall not belabor my dislike for it. I get it. Sometimes people don’t know what else to ask but general questions. One of the most common questions I get asked lately is “What’s your dissertation about?”

Over the last couple of months, I’ve been researching and writing on The Faerie Queene and Paradise Lost, comparing Spenser’s and Milton’s references to the Muses and inspiration. Inspiration itself is a huge part of any writer’s life. What would we do without it? Inspiration comes in many forms—breathtaking landscapes, quirky people, profound books, and mouthwatering chocolate.

However, many experts claim that writers should not fully rely on inspiration. If I always waited for inspiration, I would never write. Instead, sometimes I’m encouraged by friends or deadlines, and other times I’m pressured by not wanting to down a cup of coffee with nothing to show for it. How could I waste such precious caffeine?

Nevertheless, Inspiration is a great help. I’ve never been able to write poetry without it. Those that I forced myself to write, I’ve vowed never to show the world. Partially inspired by Carrie Hope Fletcher’s On the Other Side and partially inspired by a late-night bike ride where I spent five minutes under a street light watching a spider spin a web, this poem is all about that—inspiration. Well, that and a writer’s muse. 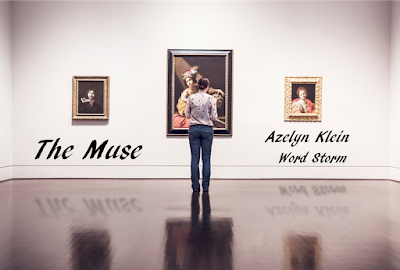 She dances on air, her skirt trailing behind,
above, the dust—she could write her name in
it—but her feet never grace the floor. Some
say that magic is merely things we don’t
know—others call it faith. This girl keeps pace
to tunes unheard, an imaginary
swift, violin. Sometimes she pauses, suspended on
mid-air, to cock her head to one side and
whip out an invisible bow, before she will sweep
into a glide on glass. Step-step-step-twirl—
Maybe this mystery is real magic when I
just trip while walking. She can make her moves
seem like art—she is Da Vinci, telling
a myth on her tiptoes, of how this cave-
man brought her a flower and fell in love.

He sprawled upon the floor, sweeping up all
the dust with his blue coat. She helped him up
and handed him her bow. He stared; she held
her violin too. Take it, said she. Play a song
so I may dance freely. He took them in
his hands and set his fingers on the strings.
Magic, he thought. There’s no alternative.

Here I play, shrieking out sorry tunes like some
earthbound pterodactyl, and still she smiles
and sweeps across the floor, dancing on air.

Let’s chat! What’re some of the small talk questions that bugs you? Do you believe in magic? What are the sources for your inspiration?
Posted by Azelyn Klein at 1:30 PM