POV in the Last of the Memory Keepers Series

I can’t believe it’s the end of 2017 already! At the beginning of this year, I set out on a self-publishing journey. In March, I published the first of my novelettes in e-book form, then in September, I released the entire Last of the Memory Keepers series in print. What fun this has been! 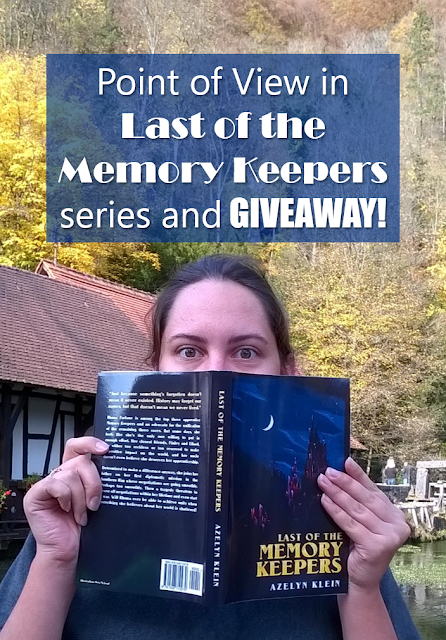 For fans of The Chronicles of Narnia and Paradise Lost, Last of the Memory Keepers is a compilation of six sequential stories and one poem. Follow Rhona Farlane and Ellard Coburn on their adventures to befriend members of other races while they fight to save their own.

Today I’ll be discussing the point of view (POV) in the series and the way I strove to resolve any issues that arose with writing in first person. For those who have not read my series yet, I have done my best to keep this post spoiler-free.

*Winners for the giveaway have been selected.

The first novelette in the series, “The Diplomat’s Daughter”, is told from the perspective of Rhona Farlane. She’s knows what she wants out of life and she’s spunky, perhaps a little too much so for a diplomat-in-training. But she’s determined to follow her apprenticeship through to the end and unite the peoples of her world.

“Spring of the year 4137, Finley proposed his most wonderful, foolhardy idea yet. Even at twenty years old, he was coming up with reckless ideas that would probably get us killed. Naturally, I supported his idea and Ellard protested. But not much. Not this time. Even as the pitch black of night in the stable shrouded his face, I could just hear the smile behind his tense voice.”

The second novelette, “The Quiet Apprentice”, takes a different approach, told from the perspective of her friend Ellard Coburn. Like Rhona, he’s an apprentice to one of the masters of the Memory Keepers, but unlike her, he’s skittish and gets along better with animals than with people.

Now compare that scene with Ellard’s confusion when his friends keep interrupting his study session:

“Finley held his hands up, then looked at me. ‘Ellard, can you please help me change the subject?’

“I couldn’t think of a single interesting thing to say. I was still trying to wrap my mind around their disagreement. Leave it up to a Memory Restorer [Finley] to argue about the color of a historical figure’s clothes. I couldn’t even remember who Zaire was, much less what he’d done.” 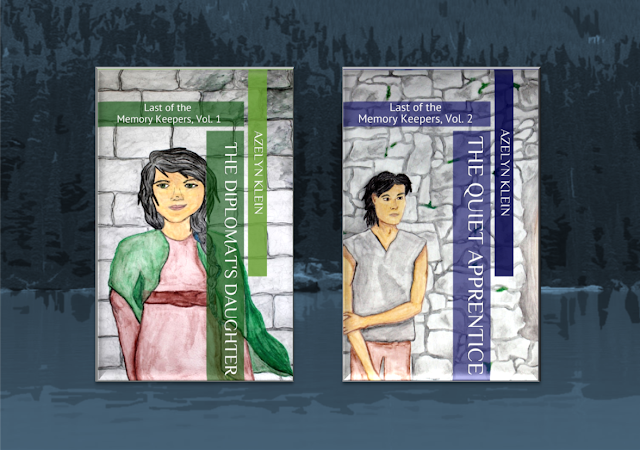 The main issue I had with writing these stories arose because I decided to go with first person. After all, how was I supposed to tell the narrative from the perspective of characters who don’t write their history down? At one point, there’s even mention of Ellard, my second protagonist, being illiterate. So how is somebody who can’t even read supposed to write a story?

To resolve this issue, I went with a verbal account instead of a written one. Because the Memory Keepers have the ability to access the memories of the trees, they keep their records by speaking to the trees, like one would write their thoughts in a diary or recite their memories to a starship’s log in science fiction. As a result, I read each story aloud to my sister to ensure it flowed well and actually sounded like people might talk.

“The Quite Apprentice” (LMK, vol. 2) explores the concept of recording memories more so than the first story. At the end of the novelette (don’t worry, this is not a spoiler!), Ellard explains that he’s storing his memories in an oak tree. And in the final volume, a certain character reveals that he listened to each verbal account and wrote them down for public record.

The Problems with Memory

Memory can be fleeting. Sometimes, people ignore certain details or remember others incorrectly. Sometimes people forget things. And as alluded to in “The Memory Thief,” some people are made to forget.

Last of the Memory Keepers isn’t just a recitation of adventures written down by a scribe. Like some works of fiction, it’s the narrators who are putting together the pieces of their stories after they are resolved. Sometimes the stories may be an exaggeration or a reflection of the past. Sometimes they leave you wondering what’s real and what’s not.

Any mistakes are my own, or you can blame it on the troubles with memory. Most of all, this series—this book—is just a story. I hope you enjoy it.

And now, the moment you’ve all been waiting for! So I’ve been hosting a lot of giveaways this month, but I can’t help it. I like my readers! Today I’ll be giving away two prizes: 1) a signed copy in print and a desert rose; 2) the entire e-book series (Volumes 1-6). Enter to win one of two prizes below:

Let’s chat! Which prize sounds more appealing to you? Have you added Last of the Memory Keepers to your To-Be-Read List yet? For those who have read the first two volumes, whose perspective did you enjoy the most: Rhona’s or Ellard’s? If you haven’t read any volumes yet, which character sounds most appealing?

Similar posts: Last of the Memory Keepers Series Announcement, LMK the Five Races Q&A, Luan and the Star’s Daughter: A LMK Companion
Posted by Azelyn Klein at 10:00 AM