Today, I rarely buy books. Especially books I’ve never read before. It’s sooooo hard when I live in a country that doesn’t speak English, and the nearest bookstore that carries new books happens to have a tiny English section only has the occasional book I might pick up but not want to own. Instead, I tend to get most of my books from the library, and even then I’m still picky.

To say that I bought A Thousand Perfect Notes on a whim and thoroughly enjoyed it… Wow. Just wow!

Who am I kidding? I’ve been following Paper Fury’s (C. G. Drews) blog for a while now, so I shouldn’t be a surprise. I like to support debut authors, so I’m proud to have bought a copy. The cover is gorgeous, and the book is even more so! 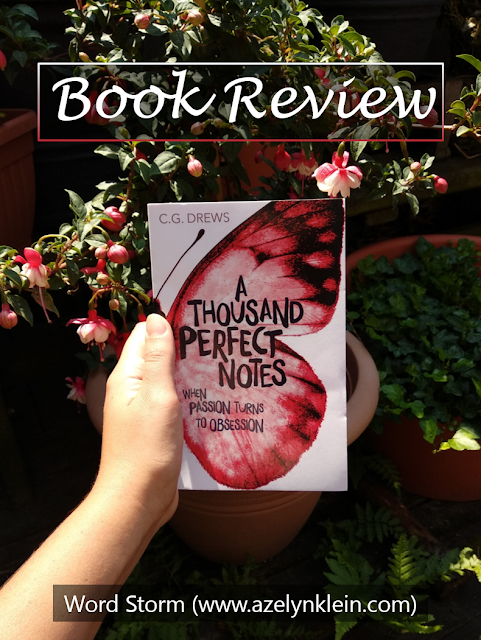 No, I am not reviewing this book in August simply because one of the characters is named August. It just sort of happened. Actually, most of the book takes place in July, so there you have it.

The characters were definitely one of the best aspects of the book. Beck is such a cinnamon roll, and I would definitely give him all the cake! He could use some more sweetness in his life. Seriously, his friend August and her family were so good for him! I wonder how he’d like the German cakes…

Another reason I enjoyed this story so much was the writing style and all the talk of music. Books about music are so fun! I only wish I could listen to some of the songs. This book would make an excellent movie.

To summarize how much I enjoy this story, here’s an actual conversation I had with my sister:

Me: This book is so good!
Sister: *reads opening line*
ATPN: What he wants most in the world is to cut off his own hands.
Sis: Why does he want to cut off his hands?
Me: Because his mother is insane.
Sis: Oh.

Is it weird that she took that as an actual reason? Wow, we read too many books. She doesn’t read nearly as much as I do, but I try to pass on all the best books.

The only thing was that I had only the faintest idea that the book was set in Australia until three fourths of the way through the book. There was more talk about Beck moving to Germany than there was of him actually living in Australia. As somebody who’s never been to the latter and actually lives in the former, I would have liked to know more than it’s cold there in July. Of course, settings don’t tend to be the focus of young adult books.

Some of the plot twists were fairly predictable, but I enjoyed the ending all the same. Sort of? I mean, I almost cried, so there’s that. It was so intense I was definitely fangirling by the end. Definitely qualifies as a well-written ending in my book!

In all, I gave A Thousand Perfect Notes 4/5 stars for relateable characters and an enjoyable story despite any predictable moments. I’d recommend it to any fans of contemporary YA novels, and I look forward to C. G. Drew’s next book!

Interested in A Thousand Perfect Notes? Have you read it yet? You might also enjoy these books: This Savage Song by Victoria Schwab, The Art of Feeling by Laura Tims, and Made You Up by Francesca Zappia.

Let’s chat! Has A Thousand Perfect Notes made it to your to-be-read list yet? Anybody out there read it? Have any contemporary YA recommendations?

Similar book reviews: The Astonishing Color of After, The Beast of Talesend, and We Were Liars
Posted by Azelyn Klein at 10:00 AM