I can’t remember when it started for me, but for the last couple of years, my mom dreamed of walking el Camino de Santiago, also known as the Way of Saint James. When she asked me to join her, of course, I said I’d go. Even though it would take at least a month—approximately 35 days, 40 if we took rest days on Sundays—even though it meant I’d have to quit my job, I wanted to walk across a country if only to prove I could do it.

So my mom researched equipment and the route we’d take, and I enjoyed biking to work, racking up my steps while there, and biking home again. Though my mom invited a bunch of people to join us, only one of her friends agreed to come. We planned to start in St. Jean, France in April and walk 800 kilometers to Santiago de Compostela, Spain by May in time to see the swinging of the incense across the cathedral.

Then, about a month or so before our trip, my mom injured herself on a cruise. She tore her meniscus by carrying too much luggage up a flight of stairs. So while her friend started the Camino without her, my mom started physical therapy. I quit my job anyway and poured my energy into research for my upcoming move, job applications, and writing.

And so, we waited. 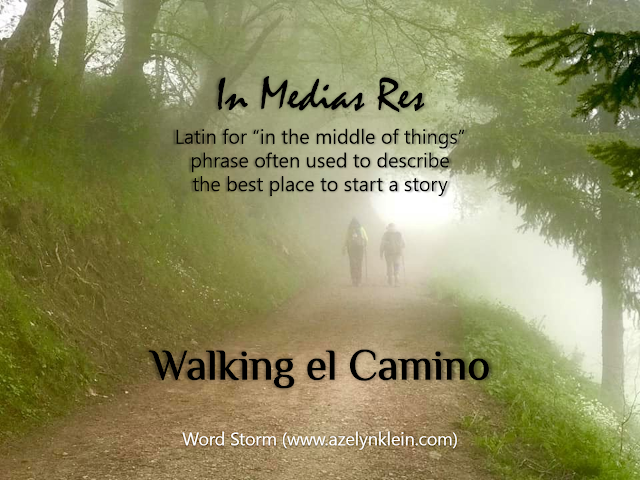 After nearly a month passed and the doctor cleared my mom for walking, we set off for Spain. It took another three days of flights and a bus trip to get there, but we finally arrived in Astorga to continue our journey. I say continue because where, after all, does a journey really begin? Is it at some set point like Saint Jean? Or is it as far back as the first pilgrim who walked the way?

If all the best stories start in medias res, so did ours. Not that my story is by default the best, just that it happened this way. As we headed out, I considered the words of Gandalf from the first The Hobbit film:

“The world is not in your books and maps. It’s out there.”

Our first day of walking was perhaps one of the hardest but most enjoyable. The town gave way to fields which ultimately gave way to foothills, and before we knew it, we were hiking up a mountain. That night we stayed in our first albergue, in a shared room with a bunch of bunk beds. I got the top bunk as I would for the rest of the trip.

The next day, we visited the Iron Cross. There, many pilgrims will lay down a stone representative of their burdens. I had picked up two rocks, one in Astorga and one from the hike that morning. Mom had brought four stones—one from Jerusalem, one from Auschwitz, one from Rothenberg, and one from outside our chapel in Germany—each to represent those whom she was praying for and remembering.

She carried her stones to the top of the mound of stones and came down crying. I knelt and tossed my stones, feeling my throat close up. A woman behind me was weeping. A part of me wanted to know her story, but maybe it was enough to simply live my own. To pray for forgiveness once more at the foot of the cross and the walk on. 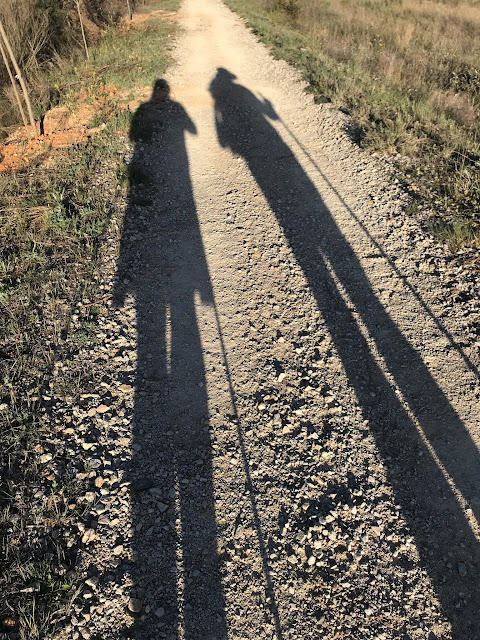 On our way down the mountain, we stopped in a tiny village with two albergues and only one restaurant. The rest of the day passed by pleasantly as I finished a book in our albergue, on the upper balcony overlooking the back patio. Then I went out to photograph some butterflies, had dinner with my mom, took a shower, and hung my towel on the balcony to dry. We headed to bed at half past nine.

The next morning, we got up at six, and mom reminded me not to forget my towel. So I went to grab it, and saw a strange light from below. Somebody was shining their phone from the patio. The person tapped at the door. Was it a fellow pilgrim or a murderer trying to get me to open the door? I figured it must be a pilgrim, considering they were knocking on the balcony door, not the front door. How long had they been trapped outside?

I rushed down the stairs, hoping I wasn’t making a mistake, and opened the door.

The man was shivering, his arms crossed, teeth chattering.

I clutched my towel, nodded, and ran back up the stairs. Awkward social interaction averted. Or maybe made worse. Come to think of it, he probably didn’t even see me nod. And I could have offered him my towel to warm up. Instead, I just left.

That day, my mom and I headed to Ponferrada where my dad joined us. 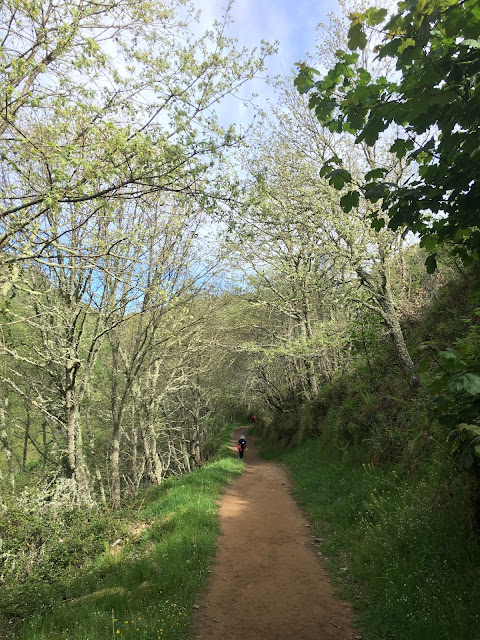 The next night, the three of us walked to Trabadelo and spent the night in perhaps our favorite albergue. We had a room all to ourselves surprisingly enough, a nice stone basin on the patio to hand wash our clothes, and a friendly little dog to greet us on the ground floor. The lady who ran the place prepared dinner for us pilgrims, and as we enjoyed our first course of delicious pumpkin soup, I was listening to other people’s conversations. As an introvert, I’m not much of one to join in on conversations with strangers. Not right away.

I overheard one guy tell his Brazilian friend how two nights ago he stepped out for a smoke and locked himself out of the building, and the next morning none of his friends believed him because some girl let him in. His story sounded awfully familiar.

I nodded, then ducked my head. What was I doing interrupting his conversation? But he had to know. I had to make it up to him for my terrible first impression.

Okay, maybe it wasn’t such a bad impression after all.

Then we officially had our introductions. The guy was from South Korea, and he said his English name was Looney. I wanted to know his Korean name too, but I never did work up the courage to ask.

He told me the full story of the night before we met, how he had taken a shower and stepped outside for a smoke. Then the door had shut behind him, and he was locked out all night with nothing but a pair of shorts and a damp towel. He said his military training helped a bit because he used an umbrella to set up a makeshift tent.

Then I had let him in, and he finally made it back to his bunk. By the time all his friends were awake, they didn’t believe what happened to him because he had been in his sleeping bag when they saw him.

The rest of our dinner that night passed in easy conversation. Looney thanked me again for saving him before he said goodnight and headed off to his own albergue.

The next morning, we prayed with the lady who ran the place. Apparently, she’d just recently bought the albergue and had only been running the business for ten days, eleven that morning. After my dad’s prayer, she asked why we were walking the Camino.

“We’re moving back to the United States,” my dad explained. “After ten years of living in Europe, this is our way of saying goodbye.”

“No,” the owner said, “maybe the Camino is a new way to say hello. As you’re walking, I hope you find what it is you’re looking for.”

Our walk started off peaceful as usual, and by that afternoon, as we were headed up the steepest part of the journey, up yet another mountain, Looney caught up with me. We walked together and talked for several hours. My family and I decided to stop for a lunch break in O Cebreiro at the top of the mountain. Looney waved goodbye and headed off with some more pilgrims from South Korea, the ones who hadn’t believed I existed until now.

Later, mom told me about a short conversation she’d had with Looney when we all stopped to catch our breath heading up the mountain.

“I like you,” Mom had said to him, “but if you ever want to date my daughter, you’re going to have to stop smoking.”

The heat rose to my cheeks. I was glad I wasn’t there when she said that. Though I didn’t disagree with her. My grandpa—her dad—passed away two-and-a-half years ago from throat cancer. 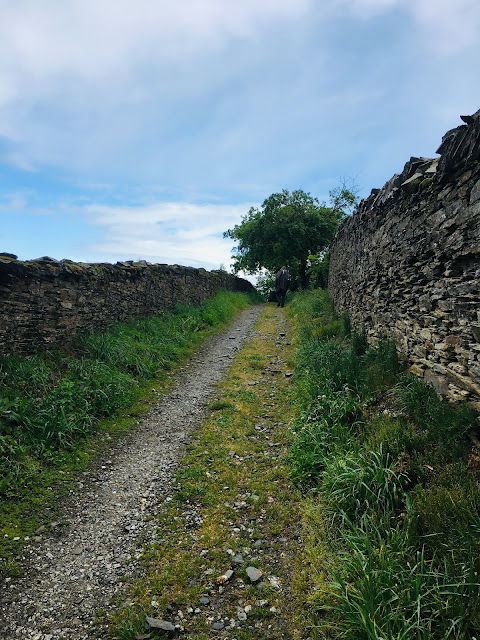 My mom and I had planned to walk 800 kilometers and ended up walking 260 instead. Plans change. Awkward introductions happen. We both faced our fears—not being able to walk the Camino and not being able to talk to people. And we both survived. We finished the Camino, and I made a friend.

Even if I didn’t see him again until we made it to Santiago. I was lying on the stones in the square, gazing up at the cathedral as is a tradition for pilgrims with tired feet, when I heard Looney talking with my mom. I sat up, and he helped me to my feet. We talked once more about the journey. For the first time, I noticed he was wearing crocs, and his Brazilian friend mentioned how he had hiked in them all the way from St. Jean.

Then my dad took our picture together.

“I’ll email you when I get back to Korea,” Looney said. “I want to see you again.” He smiled.

Check out more of my Camino adventures on Instagram #ElCamino2019!

Let’s chat! What are some recent adventures you’ve been on? Have you ever been on a pilgrimage before? If not, would you consider one?

Similar posts: Poem: At my own Pace (Video); Grades, Grad School, & Goals: Studying Abroad in Germany; and Traveling and Writing: Inspirational or Disastrous?