"Would You Rather?" Writer Tag

I enjoy coming up with absurd scenarios. Here’s one—pick a fictional character. Got them? Good, now imagine you’re stuck in an elevator with them for 5 or more hours. How dead are you? I usually pick ridiculous characters like Loki, so I’d probably be dead.

The following questions are some would you rather scenarios from the generic to the ridiculous. Enjoy! 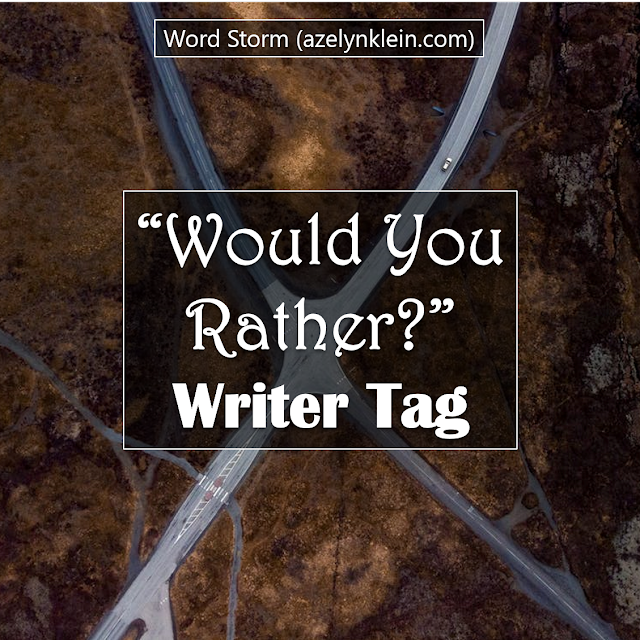 Would you rather be outlining or writing?

Writing. I don’t really like outlining because I inevitably over-world build and then don’t include all the exciting details. And for whatever reason, outlining never feels like real work because, even though I’m a plotter, it doesn’t seem like I make any measurable progress. There’s no real moment when you have to stop, which drives me crazy.

Would you rather be writing or editing?

Editing. Or rewriting. I don’t really like working on my rough draft because I’m consciously aware of how terrible it is while I’m writing it! I’m such a perfectionist. I prefer rewriting where I can go back and change everything or editing where I can really make that sentence shine, even though I sometimes reach that point where I’ve stared at a word long enough that it no longer looks correct.

See my informal Twitter poll. I was surprised (and yet not?) that so many people choose screaming. 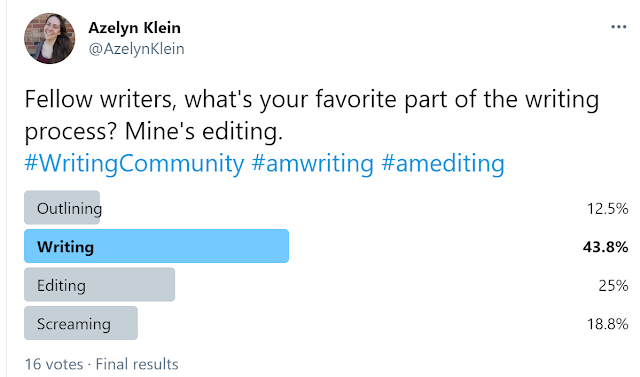 Would you rather meet the antagonist or the protagonist of your current WIP?

My YA novel doesn’t technically have an antagonist, so my sci-fi novel it is! In that story, I’d rather meet my protagonist, Cory. Definitely protagonist. It would be nice to meet somebody who’s also staring out in their career journey as a linguist/investigator instead of somebody who would probably arrange my kidnapping. No, thank you.

Would you rather have a movie based off your book or write a book based off a movie?

Movie based off my book. Even though they have a reputation for being terrible, I still find the idea appealing, and it just grows an audience! That and I like the idea of originality and coming up with my own stories. There’s something about movie to book adaptations that I don’t care for, even though I haven’t quite figured out what it is yet.

If you became a super rich author, would you prefer to have your own private island or castle?

I’m going to go with castle. While I enjoy the beach, especially tropical ones, I’m more in love with the idea of secret passageways, creaky floorboards, and the howl of the wind on a cool autumn night. Even if it was just a ruined castle where I could camp out and have a wild garden, that would be awesome.

Last but not least, pick one of your fictional characters. Would they rather be stuck in the middle of a bank robbery or onboard a sinking ship?

Hmm, I’m going to go with Haebinna, the profiler from my sci-fi novel. The space colonies don’t really have cash in a system where most currency is digital, but imagining a similar scenario, Haebinna would probably go with the bank robbery. She deals with criminals at her job anyway. She’d probably psychoanalyze the robbers while coming up with a plan to stop them. Somebody would definitely get shot.

There you have it! Just a few fun scenarios. As for my fellow bloggers reading this, I tag you! Feel free to borrow the questions and add some of your own if you’d like to participate in a “Would You Rather” Writer’s Edition post. Happy writing!

Similar posts: “Never Have I Ever” Writer Tag, Confessions of a Bookworm Tag, and The Bookish Q&A Tag