Despite my general dislike for most movies, every now and then, I see one that really speaks to me and makes me think. Last year, my mom and I watched Words, a film about writers and a book within a book. Without giving too much away, the movie made me reflect on the way I care about my stories and the way I care about people. It also made me think about my own writing and my fear that my words will never be good enough.

Right after the movie, I rushed downstairs, my fingers itching to type something to capture such thoughts. I knew I had to write. But what could I say? How could I reflect upon a good film without being pretentious? The following poem is the result. 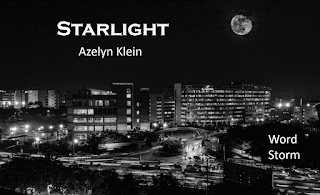 It’s only a shadow—
Dancing by the light of the moon.
You throw your head back and laugh
in the darkness, alone with the crickets
chirping, singing your song.
The pond swirls beneath your feet,
murky mud between your toes,
comforts of being at home—
Four walls and a roof. Until it’s a set
three walls, imagine a ceiling,
and feign the motions. Follow the cues,
the script, strictly standing before you.
Don’t think to disobey. They’ll hear you
break the fourth wall. Standing in the sunlight,
bare arms prickle with goosebumps before a winter audience.
Don’t make me do it. I can’t dance.
Posted by Azelyn Klein at 10:00 AM