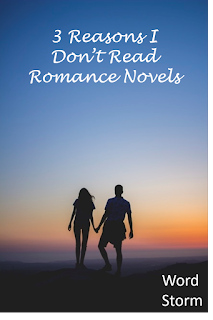 No, this isn’t your typical Valentine’s Day post. First off, let me clarify that I have nothing against romance. Sometimes I may actually find myself shipping characters. But most of the time, I try to avoid strictly romantic novels because I’m not so much interested in the gushy love as I am the actual relationships between characters whether romantic or not.


Secondly, allow me to clarify what I mean by romance novels. I’m not referring to the literary term romance novels, a type of prose that we would associate with adventure today (eg. Le Morte Darthur). By romance novels, I mean the popular term referring to novels centered on two characters who fall in love. Here are just a few of the reasons I don’t prefer to read this type of romance:

I find romance novels predictable because they all progress the same way and have two different endings: the couple gets together or one/both of them die. Because of this predictability, there are many restrictions for the genre. Because of spoilers, I will refrain from listing a bunch of examples, but the stereotype I would say is Romeo and Juliet.

Some other genres, however, do not act this way. Historical fiction, for example, can have several different kinds of plots and subplots, and mystery deals specifically with the unpredictable and little details. Generally speaking, when I’m looking for a good book to read, I prefer something that will not just make me feel something but also make me think.

John Green’s The Fault in Our Stars is an exception to this point. While some of its aspects are predictable, and self-consciously so, it made me think on life, relationships, and mortality. If an author, like Green, can acknowledge predictability and handle it in a way that still moves and audience, I’ll probably enjoy the book.

If there’s anything that annoys me more than a boring book, it’s one that appeals so much to feelings that it’s not only un-relatable but also unrealistic. I could compare my general dislike for romantic sentimentality to my original dislike for musicals. You know the kind, where the whole story comes to a complete stop for the characters to sing a dramatic song that has absolutely nothing to do with the plot. It’s moments like these I would roll my eyes and just say, “Okay. I get it. Can we please get back to the story!”


I’m not a big fan of gushy, feel-good types of stories. And while I can sometimes tolerate a kissing scene, full out make out sessions between characters are annoying, and sex scenes are a complete turn off. I have stopped reading several books, including some historical fiction novels, for the latter reason.

Romance novels tend to be popular, not literary fiction. Notice how I wrote TEND not ARE. Yes, you have books like Jane Eyre and Pride and Prejudice. (I have yet to read the latter. Don’t worry, it’s on my list. It has to be. I own a copy. See right.) But many, not all, romance novels today tend to lack the literary qualities that I enjoy so much. Instead, they attempt to appeal to a wider audience for the sake of popularity.

And just because everybody else is reading a novel is not a great reason I should. While there are plenty of bestselling authors whose books I have not read, there are many fantastic authors whose books I thoroughly enjoy but nobody has heard of. This is not to say that I prefer the obscure, but there’s something charming about having read a book without an overwhelming fandom. You don’t get all the drama. Of course, that won’t stop me from trying to recommend unknown books to all my friends.

Sure, I enjoy a well-written romantic subplot. In fact, whenever the romance doesn’t dominate the plot, I find myself enjoying the relationships and will actually ship characters. Some great examples include The Scorpio Races and The Alliance Series. When an author first gets me to care about the characters, then I’ll care about the romances between them.


I’ve heard it said that the biggest romantics are those who deny they’re romantics at all. Whether this post says anything about me, I’ll let you decide. Despite all my rantings, I don’t have anything against romance in a story. I just don’t think it should be the main focus. Personally, I prefer YA adventure, mysteries, and all sorts of fantasy.

Just like the historical fiction fan may find it difficult to enjoy a sci-fi novel, so the swashbuckling adventurer in me has a hard time enjoying romantic-centered books. Perhaps that’s why I enjoy The Princess Bride so much. The book has a little bit of everything—humor, swordfights, logic, betrayal—and yeah, I guess the romance isn’t so bad after all.


What’s YOUR favorite genre to read? What are some of the books you’ve read with well-written romantic subplots? And for the sake of Valentine’s day, who’s your favorite fictional couple?