Welcome back to my mini-series on foreshadowing! Last month I wrote Why Foreshadow? Today I’ll be sharing with you some of the major downfalls of foreshadowing.

Caution: Because of the nature of foreshadowing, the way that it includes predicting of plot events and its fulfillment, this post includes some spoilers to The False Prince and Inheritance (The Inheritance Cycle, book 4). 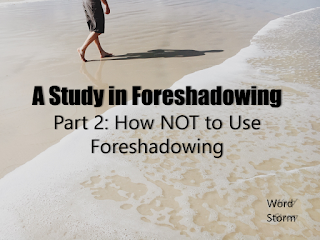 Foreshadowing, although one of my favorite writing techniques, can be one of the most difficult to master. But it doesn’t have to be. Below I’ve included some of the most common mistakes made in foreshadowing:

Don’t give away the story in the title or the premise.

While I’m not necessarily an advocate of incredibly vague titles or confusing premises, I don’t like ones that give away all the major plot twists. In fact, with some books I’ve given up reading the back entirely because I don’t want anything to be spoiled for me.


(SPOILER ALERT for The False Prince.)


I picked up The False Prince via recommendation, and while the prose was excellent and witty, the plot was predictable. And it all came from the title. The word false alludes that there is a real prince out there, and 99% of the time, it’s the main character. Go figure.


Then I read part of the premise:


“In a discontent kingdom, civil war is brewing. To unify the divided people, Conner, a nobleman of the court, devises a cunning plan to find an impersonator of the king’s long-lost son and install him as a puppet prince. Four orphans are recruited to compete for the role, including a defiant boy named Sage.”


“Huh,” I thought. “Wouldn’t it be something is Sage turned out to be the real prince.”


And this was before I had even read a single page. I will admit, the narrator seems unreliable for a while, but in the end, he’s predictable.


The premise and the book titles are supposed to be beautiful teasers, not a self-explanatory synopsis. Please pay attention to the difference. Teasers hook the readers. Synopsis summarize everything. Teasers are exciting. Synopsis are explanatory. Unless you’re writing a cookbook in which readers need to know everything (especially what they’re cooking), a little bit of mystery is a good thing.


Of course, there are exceptions to this point. Many books have used their titles to in order to reveal major plot points, and it’s the how the author tells the story that hooks the readers (eg. Rosencrantz and Guildenstern are Dead).

In Christopher Paolini’s The Inheritance Cycle, the . The stakes are high and only grow higher as the series progresses, and as it does, the narrator presents readers with several foreboding promises. They come in different forms, from prophecy to oaths made by characters.


One of the very first promises readers are given comes in the form of a prophecy that states Eragon will leave Alagaesia and never return. Knowing how much Eragon has given up to protect the people of Alagaesia, which also happens to be his home, nobody wants to see him leave. In this particular prophecy, Paolini follows through, and Eragon and Saphira leave after the defeat of Galbatorix because they suddenly find themselves to be the most powerful beings on the continent.


On the other hand, Paolini fails to follow through with other dreadful promises. For example, in Eldest, Eragon’s cousin Roran helped the people of Palancar Valley (their home) escape the Ra’zac and get to safely. But Roran can’t save everybody, and several men die in the process. One grieving widow blames him and swears she will have a blood price from him. The suspense is built, and the reminders of his debt continue throughout the books as the woman seeks justice. But when her time finally comes, all she does is cut his hand without actually giving any indication of forgiveness.


Similarly, in Brisingr, Eragon made a deal with an ancient Menoa tree that he would give it anything it wanted in exchange for a magical steel beneath its roots so he could make his sword. In Inheritance, he returns to the tree to fulfill his promise, and the tree says maybe four words and tells him to go instead of asking for anything.


In both instances, I got to the end and thought, “Well, that was anticlimactic!” I was disappointed. Not because I wanted Roran to die or Eragon to get hurt, but because it seemed like the high stakes didn’t matter in the end. It felt like a cheap writing to get beloved characters out of a difficult situation.


If you’re going to promise high stakes, follow through with them. Otherwise, readers may not buy into the suspense next time. And a book without suspense is one that’s less likely to be read.

The Lego Movie is a great example of how to use foreshadowing, and how not to do it. It plays on expectations and reality in a humorous way that pokes fun at many, many clichés in plots. For example, in the opening scene, President Business marches in to carry out his plan to end the world. Determined to stop him, Vitruvius says, “Wait… There’s a prophecy.”


You can just hear his voice dripping with sarcasm. Prophecy is one of the most overused forms of foreshadowing today, and not because it should be avoided entirely but because people tend to use the same prophecy over and over again. Recycling is good to save the earth, not your story.


I’m not saying you can’t use prophecy. If written properly, it can serve as a great method for foreshadowing, but more often than not, stories fall into the trap of using the same predictable prophecies over and over again.


Just a few clichés in foreshadowing include: The prophesied teenager from foreign country/dimension saves the world. The deadly bomb that’s going to go off only to be stopped seconds before it does. Basically, any time a boy meets a girl, and they fall in love.

Another one of my favorite kids’ movies that pokes fun at plot holes is The Emperor’s New Groove. Near the climax of the movie, the heroes race the villains all the way back to the capital city, overtake them halfway through the journey, only to have the bad guys show up before them. That’s when the characters stop and say, “No! It can’t be! How did you get here before us?”


“Well, you got me.” He pulls out a flipchart showing their routes and the villains’ random disappearance. “By all accounts, it doesn’t make sense.”


The problem is not the plot twist; the problem is that it’s unexplained. Don’t throw random stuff at your readers thinking, “Hah! They’ll never see this coming!” Because maybe they won’t. It’d be just about as fair as the catcher at a baseball game expects the batter to miss the ball only to have him get hit in the back of the head with a football. It just doesn’t make any sense, and it’s isn’t consistent.


My main point: don’t try to be too obvious with your foreshadowing. It’s as simple as that. Be sneaky. But hint at what’s coming. That’s how writers are seen as clever when readers still don’t see it coming. It may be difficult to master, but countless authors have proved it’s possible. For more on this subject, be sure to check back next month for part 3: Three Methods for Foreshadowing.


Previously in A Study in Foreshadowing: Why Foreshadow?


Let’s chat! What would you add to the list? What helped you the most? What are some of the worst misuses of foreshadowing you’ve seen?
Posted by Azelyn Klein at 10:00 AM