I get inspiration from the strangest places, and my writing never comes out exactly like I initially thought it would. Not that it’s a bad thing. When I first started classes at the University of Nottingham, my aunt remarked that the place was so beautiful I’d surely find inspiration to write. And I did. But my writing wasn’t the poems or the stories I expected.


In my time there, I wrote maybe two poems about Nottingham itself, and my poem “Puddle” was inspired off one of the first times I rode my bike past a puddle. Not that the poem has anything to do with biking. And the setting could be anywhere.


The same could be said for the following poem. I wrote it based of an observation I made while watching a seagull glide above the morning shade I was standing in. The setting I’ll leave up to you. Just as the words take off on their own the minute I put my fingers to the keyboard, may your imagination take flight. 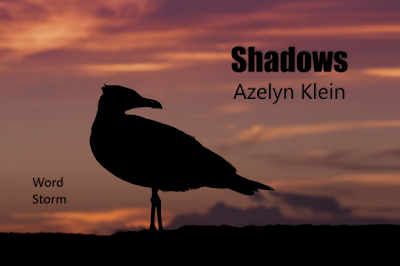 
I’m in over my head in darkness,
standing in shadows of the box-shaped buildings,
like I’m in a deep, gray ravine beneath the waters
with the seagulls gliding overhead,
their underbellies alight against the blue,
like they’re gliding on light.


I’m up to my shoulders in shadows,
the shade spilling like a waterfall,
filling my lungs with a cold breath
and sprinkling my face with a chill
that I wipe off with my scarf.


I’m up to my knees in shadows,
the sunlight taunting me now,
for my toes are still cold within my boots,
but I’ve had to peel my sweater off
as I wade across darkened cobblestones.


I’m standing in shadows,
the darkness melted at my feet, never fully gone.
Standing in a bath of sunshine isn’t quick,
like jumping into freshwater.
It’s slow, gradual, like friendship, like love,
but one shard of a cloud, then goosebumps will crawl up my arms.


Let’s chat! Where is the poem set in your mind? What sort of things or places inspiration you?
Posted by Azelyn Klein at 10:00 AM