Book Review: Of Myth and Monster

This story is my favorite. No, this one! No… Argh! I like them all!

I always get excited when the Phoenix Fiction Writers come out with something new, whether it be an anthology or a book by an individual author. The only problem is, they often come out with stuff so fast that I can’t keep up! Which means there’s plenty to read of course, and my TBR will never be sad.

Of the authors who are a part of PFW, I am most familiar with the works of Hannah Heath, Kyle Robert Shultz, and Nate Philbrick. Anthologies like this one keep introducing me to new authors with their wonderful stories. Last year, they came out with Strange Waters (5/5 stars), and this year, they recently released Of Myth and Monster.

I received an ARC in exchange for my honest review. All opinions are my own. 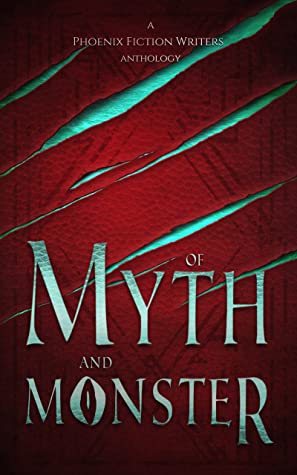 “Mistakes Were Made” by Hannah Heath

The first story in the anthology features a fantasy adventure of a college student who accidentally loses her friend’s homework to a mythological creature. I particularly like how the story is a prequel to her series on Wattpad, So I Accidentally Killed the Chosen One. Readers get a glimpse at some of the characters before their main adventure begins.

Though I sometimes struggle to imagine the settings of Heath’s stories, I always enjoy the characters. Guillerma and Mundo make quite the contrast, and now I’m curious to see if Mundo will have a large role in the rest of the series as well.

Then there’s gems like this one that describes the stress of college finals perfectly:

“I pull myself together and scramble to my feet only to be jostled by a guy wrapped in what looks like coffee-stained bed sheets.

“‘No sleep, no time, gotta study,’ he mutters as he stumbles down the hallway, an art project tucked under one arm and VR goggles tucked beneath the other.”

“The Boy Who Listened” by Kyle Robert Shultz

“I just can’t fully express them in a way that everyone else can understand. If I tried, I’d probably just make it harder for people to listen to me. So I keep those feelings inside, and people think that’s brave, but it’s not. Not always, at least. Sometimes I don’t want to be brave.”

Of all Shultz’s stories and books that I’ve read, this one is probably my favorite so far. While he typically writes humorous stories, this one is a little more series, and the themes were excellent! I actually found myself empathizing with the main character, Noah. At first, I thought he perceives things one way, but as the story went on, I realized it was much deeper. He just wants people to be able to understand him, even though he has difficulty communicating.

Then the Greek deities as teachers tied in with a magical academy provided a familiar basis for a fantasy story. I particularly like how Athena turns into a sleepy owl during the day and a librarian at night.

“‘Fear devours,’ she could almost hear her mom saying. ‘Tell it you’re not on the menu and keep living.’”

The first sci-fi/fantasy story in the collection! This one jumps right into the action, providing a report about events before the beginning of the story, then gradually builds up the main action. Which is amazing!

I particularly like the way it intersperses reports and news clippings with the main narrative, which progresses rather quickly but not at a rushed pace. I particularly enjoyed how the story incorporates various fantasy species into a futuristic society, especially seeing a civilian minotaur on a train, a pygmy phoenix as a pet, and a siren on Hestia’s team.

The themes were excellent too, and I just love Hestia’s perspective. Though I’m curious to see how her life would play out afterward.

Yet another story that combines sci-fi and fantasy elements. Though this one actually takes place in space with the interdimensional gods of Troy determined to destroy Odysseus. An interesting approach on The Odyssey, what with the crew sailing a wooden ship through space and wielding swords. The story itself only covers the mouth of Scylla, though it hints at a later quest of destroying Hades. I’m curious to see how Dawson writes more of this fictional universe.

“Wub-Nub contemplated this. And then contemplated harder. After giving himself a very minor headache somewhere between his left eye and his right shoulder blade, he decided he should probably stop contemplating it before he inflicted permanent damage.”

I’ve never read anything by Frank before, but I heard he joined the Phoenix Fiction Writers not too long ago. This particular sci-fi-fantasy story hints at a certain story that shall-not-be-named but is pretty obvious from furry creatures that live on a moon and slightly resemble but are not Ewoks. At first, I found it a little annoying as I am not a fan of Star Wars nor Ewoks, but I ultimately liked the way Frank developed his world with a grumpy protagonist, Wub-Nub, the island he lives on, and the fantastical creatures there. There’s even a point where the characters break the fourth wall.

The only thing I can’t stand is the ending. HOW DARE IT END LIKE THAT!!! I’m still mad, thank you very much.

“Lamp of Silver” by Grace Crandall

“How could any life not be something to rejoice over? Another set of ears to share the sounds of the world with, another pair of eyes to drink in the light?”

This story is beautiful. The writing style simply drew me in, and the themes concerning life and death were excellent! Another story set aboard a ship, but this one takes a more traditional, sea-faring approach. Oh, yeah, and it’s about pirates. Yasser, the protagonist, first encounters magic on an island when he meets a not a genie but a memento, who is insistent on telling him an important fact of life.

“The Staff of Callewhyr” by Deck Matthews

The story of Renlyn, a monk on a journey he didn’t ask for, with Arnak, a protector who lost his uncle. Or did he? From a tiresome ride on horseback to a boat ride across a subterranean lake, this fantasy story features complex characters as well as a complex world. At first, I was concerned that the ending would be too easy, and I wondered how Renlyn of all people would manage to get out a scrape, but Matthews sets up the story rather well. Like many of the other stories in the collection, the ending is complete but rather open ended, and I’m curious to read more about Renlyn and Arnak.

“… the hillside settled into a palpable silence. Trees rose through the fog like the dark masts of a hundred ships lost at sea. The trail beneath our feet swiftly faded and vanished without a hint of what lay ahead.”

A story about loss, love, and loyalty. Oliver just wanted to study journalism when he got recruited for a war. Months later, he’s on a journey to help find a doctor who will heal Mónica of her tuberculosis. Not only does the story have great characters, but it also has a great setting. Up in the Pyrenees Mountains, the Oli and Món encounter a touch of magic and a group of orphans. This story almost made me cry. Seriously so heartbreaking and yet so, so good!

“The Eyes of the Barghest” by J. E. Purrazzi

The perfect conclusion to a collection of epic sci-fi-fantasy stories. This one is pure fantasy, though, and it’s set amid the snow-filled woods as Eyva and her sister Brit are heading to a fjord to escape the plague that has taken their family from them. This story had me shivering. It didn’t help that the AC in my house is on high. Then the whole mythical element of the barghest was so well-executed and heartbreaking.

I still don’t have a favorite among these stories. They’re all good!

Of Myth and Monster just released yesterday, which is super exciting!

Interested in the book? Have you read it yet? You might also enjoy these books: Strange Waters by the Phoenix Fiction Writers (Dawson, Frank, Garrett, Heath, Phibrick, Pierce, Purrazzi and Shultz), The Beast of Talesend by Kyle Robert Shutlz, and The Scorpio Races by Maggie Stiefvater.

Let’s chat! Has Of Myth and Monster made it to your to-be-read list yet? Have you read it yet? Have any monstrous fantasy/sci-fi recommendations?

Similar book reviews: The Light at the Bottom of the World to The Art of Feeling, Strange Waters, and Fawkes