How to Balance Multiple Writing Projects

Hey, guys. Sorry, I ghosted on everybody last week. With much reluctance, I had to put down my beloved beardie, Thorin “Pancake.” I wasn’t up for much of anything, especially not writing.

Plot bunnies. Plot bunnies everywhere! A writer’s worst nightmare, right? Maybe not. Sometimes it’s an ideal when we just can’t get the ideas to come. Whatever the case, writers are often encouraged to pick one project and stick with it. After all, that’s the only way to actually finish the thing. Or is it?

Writing, I’ve found, is not so simple. Many concepts we often call “writing rules” are more like guidelines. Take the stick with one project rule. I apply it sometimes, but more often than not, I bend it. Look at my past projects. I took on two stories for NaNoWriMo last November!

Here are just some of the ways I balance working on multiple projects. 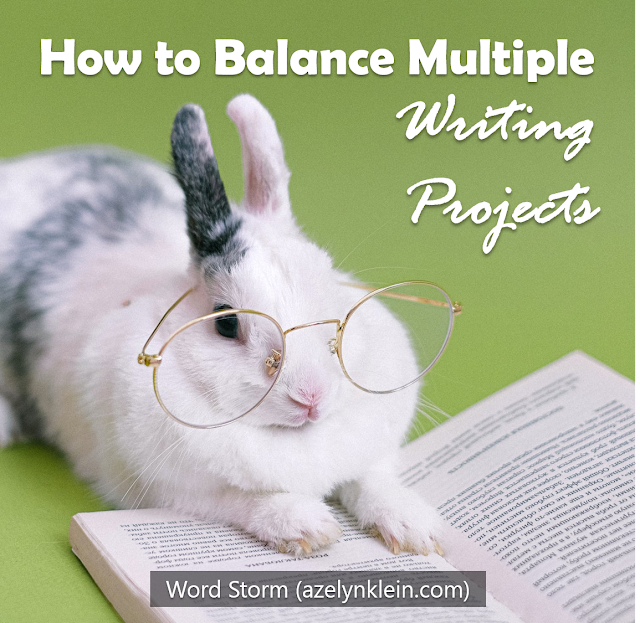 Stick with you selected project(s) instead. I know it’s tempting to chase new ideas. It really is. Especially when I’m in trudging through the middle of a book and I come up with another interesting story idea, and I just want to quit what I’m working on and chase after it.

That’s not to say that you can never work on that project. Just that it’s better to finish whatever stage you’ve started, whether its outlining or the rough draft or editing draft 5. I do allow myself to write down the idea, so it doesn’t fully get away. Then, once I’ve finished my current stage, I may chase that plot bunny.

Have a Plan of Action

When it comes to finishing multiple projects, it helps to have a plan. For example, if I’m working on two projects, I’ll decide when I’m going to work on one, for how long, and when I’ll switch back to the other project. This way, when I finish the rough draft of one story, I can immediately start editing another. Besides, then I can put some distance between one story so when I come back to it, I have a more objective view.

It would be really cool if I could get into a rhythm of outlining one project, then jump into writing another, then jump into editing a third. Who knows? It could happen!

In reality, though, my plan ends up more like this:

Whatever the case, there are some general timelines I apply to different writing stages. The following are estimates based on my past projects:

*This is the one I’m not flexible with. Ignoring a project so I can come back with an objective perspective is easy.

This step can be rather tricky. After all, how do you know when it’s time to set a project aside and call it quits? Honestly, it depends. By project, I mean a story I’ve completely drafted, not a partial. I’ll shelve projects for three main reasons:

If so many projects get shelved, then what is there left? New stories of course! Because I set aside so many projects, it frees to me up to work on something new. To chase that plot bunny. And because of the rest periods between drafts, I always like to have a second project to go back to.

So there you have it! Just a few of the ways I balance multiple writing projects.

Let’s chat! How many stories do you usually work on at the same time? Do you have any tips for writing multiple stories? What does your writing schedule look like?

Similar posts: My Process for Writing Poetry, Stages of a Plot Bunny, and Three Methods for Outlining Your Novel