Do you ever have those moments where you’re visiting in a garden and see a stone archway or maybe you’re walking in the woods and come across a peculiarly bent tree and think, “This looks like a portal to another world”? Sometimes I do.

Today, I’m picking back up with blogging with a new mini-series—subgenres! Every month for an undetermined time, I’m going to pick a subgenre and recommend a couple books. I’m going start with one of my favorites, and one of the more familiar ones—portal fantasy. 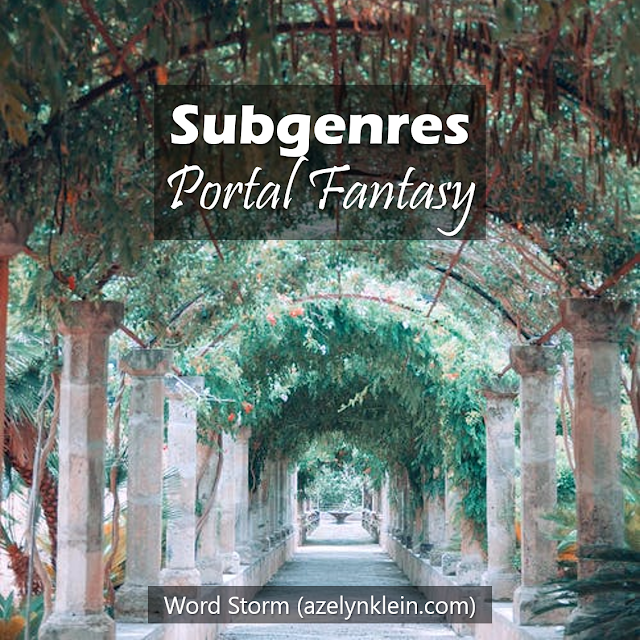 Portal fantasy: a subgenre of fantasy that features at least two different worlds. The character(s) often start in our world and travel to another world via some magical method, often a portal, which often takes the form of a door.

Many, though not all, portal fantasy stories tend to include some sort of coming-of-age protagonist, so it’s a great subgenre for young adult fiction. Part of the charm of portal fantasy is experiencing the wonder of a place through the perspective of a child.

Take C.S. Lewis’ The Chronicles of Narnia for example. When the Pevensie children first discover Narnia, they may not want to live there for the rest of theirs lives, but they soon come to love the talking animals of the land. In later books though, some of the characters “age out” of Narnia and are told it’s time to live in their own world from then on. While this can be disheartening, it’s a part of the growing up process (or in some cases, the re-growing up process) that the characters endure. 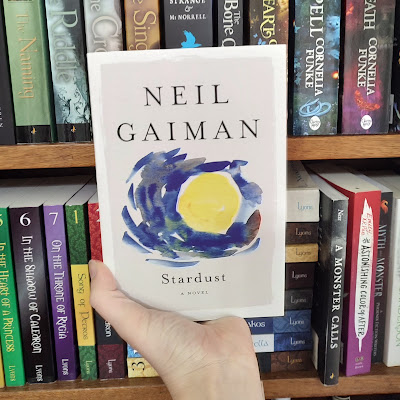 Another feature includes one or more characters trying to stay in the other world or trying to get back to ours. In this sense, portal fantasy always features some sort of journey, from one world to another. Though why anybody would want to leave these fantasy worlds, I don’t know. They tend to be pretty awesome. I’ve said it before, and I’ll say it again—if I happen to find myself in a magic realm, please leave me there. I don’t want to come back.

A lot of traveling takes place in Neil Gaiman’s Stardust, from a tiny little town in England called Wall across the realm of Faerie and even into the clouds where ships sail the skies. Not to mention various methods of travel from a magical candle to a unicorn to a ship to just plain walking. It’s a weird book. I like it.

One might even put Howl’s Moving Castle by Diana Wynne Jones in this subgenre because it features a character originally from our world who ran away to another, and with a title like Moving Castle, yes there’s lots of traveling. I’m talking about the book, here, not the movie. England pops up once or twice, but it’s not the main setting. The castle also features a portal door, which lets out in various cities. Maybe I’m stretching it.

Portal fantasy doesn’t just feature magically transporting from one world to another, though. It also tends to feature some sort of magical item or ability or both. Take the Shades of Magic trilogy by V.E. Schwab. Some of the characters have the innate magical ability to world-hop, and some characters (sometimes the same ones) have magical items like a multi-sided cloak or an evil rock that will corrupt the heart of an entire realm.

The term world-hopping makes me think of Brandon Sanderson’s Cosmere books, but they don’t feature our world, so it’s not exactly portal fantasy… Oh, well.

One of my favorite things about fantasy is the variety of plots, and portal fantasy is no different. Some stories like Cornelia Funke’s Inkworld series feature a quest to defeat tyranny and go home (or find a new one), and others like Alix E. Harrow’s The Ten Thousand Doors of January feature one character’s hunt for the truth while evading those trying to cover it up and uncovering many Doors along the way. Some stories are about realm or kingdom saving, and others have lower, more personal stakes. I enjoy them both. 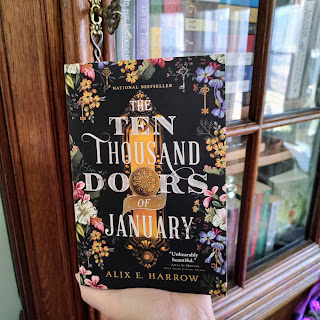 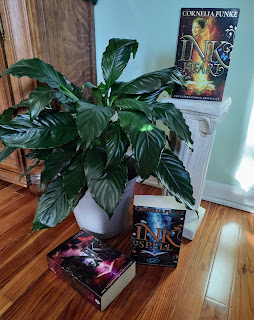 I’m seeing a trend in author names. If you abbreviate one or two of your first names, you might be a perfect fit for the portal fantasy genre. L.A. Klein. What do you think, guys? Should I write a portal fantasy?

Let’s chat! What are some of your favorite portal fantasy novels? Have you read any that I listed? Are there any others that you’d recommend?