I was chatting with one of my friends the other day, and she asked a question that got me thinking, “Do your characters share your beliefs?”

“Sometimes,” I said, “it depends on the story.”

There’s a whole debate out there as to whether or not entertaining stories should have a message or not. Personally, I lean toward a message, but not necessarily a forced one. I like to slide it in-between the theme so that those really looking for it can find it. These themes usually show up halfway into draft one and get fully fleshed out in drafts two and three. I don’t usually pick a theme in advance but let one develop naturally in my story.

The same applies to the characters. I don’t necessarily set out going, “Okay, this is what you believe. Go. Act.” I prefer to discover what my characters believe as the story goes on, then I’ll delve into those beliefs a little more throughout the drafts. This process allows me to come up with something naturally. It feels more genuine that way. I don’t like stories that try to shove a message down a reader’s throat.

Here are a couple of examples of my protagonists with different beliefs. 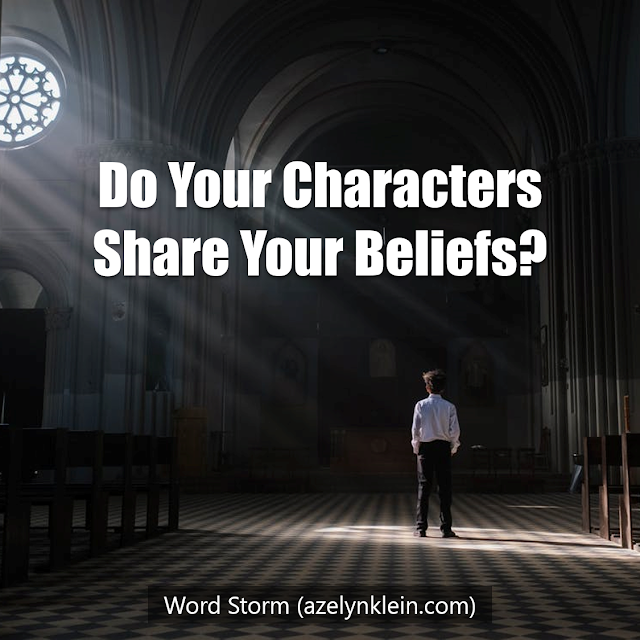 Cory, the protagonist of this story, is a fresh-out-of-college graduate who’s starting a new job. I’ve been there, done that not too long ago. But that’s about where the similarities end. She comes from a different background than I do, and her personal goals are purely career-driven.

She first sets foot in a religious building during the narrative itself. Some of her coworkers are Christian, and some are atheist. Cory herself is searching, still figuring out what she believes.

Astor is just starting high school, and she is being raised in a Christian military family. I drew a lot from personal experience in this particular story, but as a result, I worked hard to make her different from me in other ways.

Personally, I don’t like it when a writer inserts themselves into a story. Then, all they have to do is ask “What would I do?” in regards to certain situations, which is kind of boring. It’s much more challenging to ask, “What would this character do?” Besides, another danger of self-inserting is wish fulfillment, where everything magically works out in the end for that character. As a reader, I find this trope terribly annoying and unrealistic.

So yes, Astor and I share similar background and beliefs but our approaches to certain situations are different.

In my latest story (where I just finished the rough draft!) my main character is also raised in a Christian household, but there’s still plenty that’s different about her life.

As for my next project, who knows? My characters often surprise me. I like to write with themes and a purpose, but starting out, I just want to tell a story. Everything else develops as it goes along.

Let’s chat! Writers, what about you? Do your characters share your beliefs? What’s your writing process for developing them?

Similar posts: Campfire Writing, Finding the Best Writing Method, and Writing Update: To Sequel or Not to Sequel?