Don't Judge a Book by its Author, Or Should You?

Boy, I’m glad I took a summer hiatus. Having two jobs has kept me incredibly busy, especially since as summer came to a close. That and I’ve been dealing with some family stuff. I haven’t had the time to write.

I feel like the world is more political now than when I was growing up. Or maybe as a kid, I just didn’t notice the political atmosphere. *blech* Either way, it seems that everybody has an opinion on just about everything.

Readers’ opinions of authors are no exception. Some authors are likened to heroes while others are despised. When did art become about writers and not the books themselves?

Sure, buying an author’s books or checking them out from the library supports the author. As an indie author, I get it and often enjoy supporting fellow writers by buying their books. But where do we as readers draw the line? In short: it’s complicated. Here’s why.

Side note: I’m not going about to write about politics. Personally, I like to keep my political opinions separate from my author profile. I will occasionally write about controversial topics, but this post is not one of them. As a result, I will be writing about some real examples and some hypothetical ones. 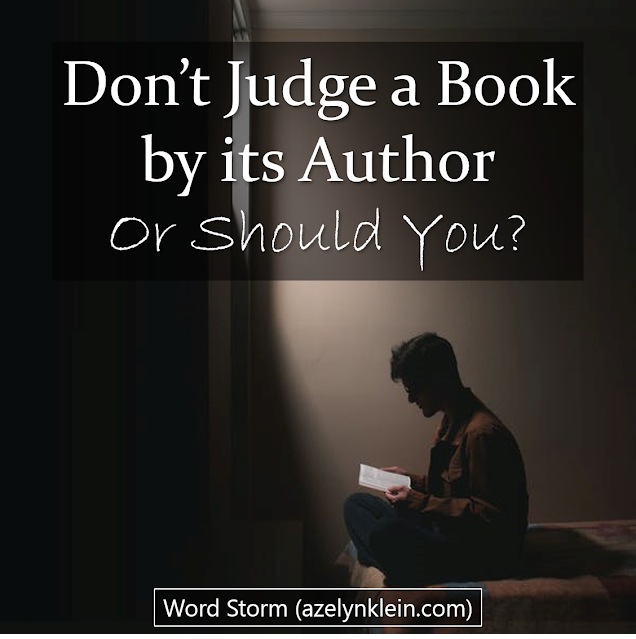 The Dangers of Hero Worship

You may have heard the adage, “never meet your heroes.”

Now, I haven’t met many authors, so I can’t say I’ve had negative experiences meeting them. Actually, the authors I’ve met have been inspirational. (Hi, Lisa!)

At the same time, though, I’ve seen the dangers of hero worship. People, even those you admire, will at one point or other let you down. That’s not to say that you can’t admire certain authors, just that it’s not wise to put them on a pedestal. Authors are people too.

Authors with Different Beliefs from their Readers

Here’s a tricky one. What do you do if you believe one thing and you come across a book by an author who believes something different? As a Christian, I come across this situation quite often, from authors who are atheists to others who are Mormon. I don’t read much Christian speculative fiction because I tend to find the genre rather limiting (see Controversy in Fiction: Christian Fiction).

I don’t take my beliefs from fiction, either, though there are times when reading will challenge me. Without reading other perspectives, how would we grow?

“It is the mark of an educated mind to be able to entertain a thought without accepting it.” –Unknown (often mistakenly attributed to Aristotle)

I remember one time I was sitting in a book club, and some of the other readers were talking about one author (I can’t remember which one) who was an absolute dirtbag, but they liked his books. For that very reason, I respected my fellow readers for their discernment and their ability to acknowledge that even though they didn’t like the writer’s lifestyle, they could appreciate his work.

I know there are several painters whom I’ve shared a similar opinion, but I can’t think of any writers off the top of my head.

Separating the Author from the Book

I like reading the acknowledgements in a book and the author’s bio, but that’s generally where I stop. I read so many books that reading about each and every author would take up a lot of time. If I’m really into a book or another, I may look up more info about the author, but it’s rare.

Generally speaking, I try to focus on judging the book for what it is, not for who wrote it. Yes, an author’s beliefs can influence their writing, but I also take on the idea that once a book is published, it doesn’t wholly belong to the writer anymore but to the reader.

Let’s chat! What’s your take on judging a book by its author? Have you ever met any of your favorite authors in person?

Similar posts: 7 of my Go-To Authors; Let’s Agree to Disagree: Reader vs. Author Opinion; and Controversy in Fiction: Christian Fiction