A lot of people probably won’t be traveling this summer. I recently went to visit my grandparents because my grandma has terminal cancer, and we drove twelve-and-a-half hours in one day to minimize contact with strangers. I don’t necessarily recommend it, but you do what you have to do. The visit was rather uneventful.

For those who can’t travel, I’ve put together a bookish vacation instead. For my international readers, here is just a glimpse of a few of the states. You don’t have to read them in the order listed. You don’t even have to read them all! But if you want to give it a try, you’re welcome to! 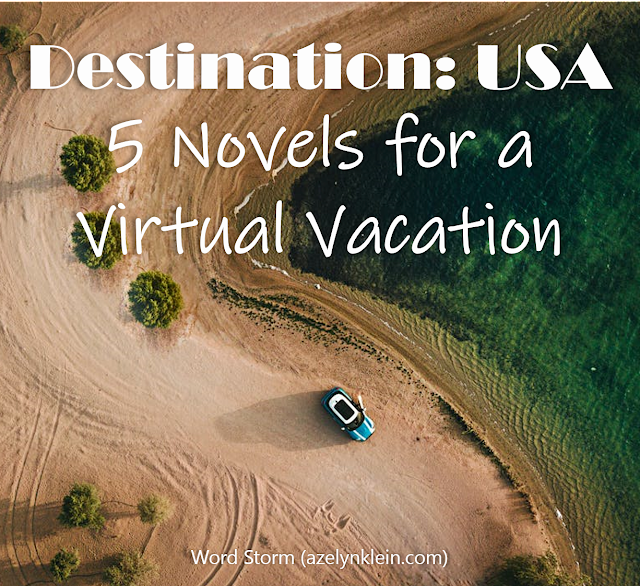 To start out our mini bookish vacation, we’ll fly to the Aloha State—sunny Hawaii—where rainbows are a daily occurrence and the air smells like saltwater. The only thing is, life for Rumi isn’t all sunshine. Between her and her sister Lea, Rumi is the cranky one. But when Lea dies in a car accident and Rumi is sent to Hawaii for the summer to live with her aunt, Rumi is less than pleased. An exploration of grief and self, Summer Blue Bird (a YA contemporary) is perhaps the best book set in Hawaii that I’ve read yet.

Alaska—The Smell of Other People’s Houses

From Hawaii, we’ll take a flight back to the mainland, but not the mainland the majority live in. Nope. We’re going to Alaska! Though I’ve never actually been there, I feel like I’ve gotten a glimpse through books. The Smell of Other People’s Houses (a YA historical fiction) surprised me. At first, I didn’t think I would like it, but in the end, I liked the way the book tied in the four narratives, and the cultural exploration was equally worthwhile.

Next up: road trip! The Someday Birds (an MG contemporary) starts out in California, then heads across Nevada up to Wyoming, then across Montana all the way to Illinois, and finally on to Virginia. Like any good road trip, there’s a spattering of setting, but more importantly, there’s excellent character development. Charlie is trying to reconcile where he really belongs when it comes to relationships all while he goes on a hunt for the birds he wanted to see with his Dad. The story is also an excellent representation of autism and OCD.

I also really like the tagline for this one: “Only 2,500 miles of fresh air, family, and chaos to go.” If that doesn’t sum up road trips, I don’t know what does!

Time to backtrack a little. I know we already drove through Indiana, but it’s not like we’re going to interrupt one book with another. (I’m looking at you, The Horse and His Boy!) All the Bright Places (a YA contemporary) explores Indiana, another state I don’t think I’ve ever been to in person. Don’t let the cover deceive you though. Theodore and Violet are here not just for a school project to explore the state. They’re here to rip your heart out.

Apparently, there’s even a movie out on Netflix. That means another reread for me, and I’ll have to brace myself.

Now that we’ve explored a glimpse of the States, we’ll end our trip in the Big Apple, New York City, but not like the one that exists in our world. York: The Shadow Cipher (an MG contemporary sci-fi) explores a New York that isn’t quite like our own, or is it? Tess, Theo, and Jaime explore their city in an attempt to solve the cipher that has stumped treasure-hunters for centuries in an attempt to save their home.

Unlike the other books, which are stand-alone’s, this one is actually a trilogy. Book three just came out, and I’m super excited!

Thus concludes our mini trip. I hope you enjoyed the recommendations!

Let’s chat! Have you read any of the books listed? Did any of them make it to your TBR? What’s one state you want to read a novel about? Have there been any books that really captured where you live?

Similar posts: Mini Book Reviews: From The Light at the Bottom of the World to The Art of Feeling, 7 Books with One Main Setting, and Book Review: Almost American Girl