After people ask me where I’m from and get a plethora of answers—Germany, Italy, Texas, Washington State—they often ask me which place I like the most. Another impossible question. I usually tell them that I don’t have a favorite. I like wherever I’m living at the time while I’m there. It’s not fair to compare places by ranking. Germany has some gorgeous forests and mountains, but nothing compares to the climate and beaches of Hawaii. Even the Chihuahuan Desert of Texas is beautiful with its striking blue skies and endless sea of poppies that covers the mountain foothills in the spring.

Sometimes though, I’ll miss an aspect of one place while I’m living somewhere else. I missed the beach in Germany. I missed the sunshine in England. Yet there are still places I miss less than others. I have less sentimental attachment, in other words. I like to jokingly call Missouri “misery” because of the pronunciation similarities, even though I was never really miserable living there. It’s just that the state has little attraction for me, aside from the people who live there.

I have a similar detachment regarding England. Hold on, you might be thinking. Didn’t you love England! Sure, I write about it a lot. I love English Literature. I love the rain. Living there was an adventure! But it’s like Bilbo said before he set out: sometimes adventures are “Nasty, disturbing, and uncomfortable things.” Yes, I had plenty of good times in England, and I did earn my MA in Literature there after all, but it was a hard time for me as well. Though a lot of it is fictionalized, this poem is about such a time. 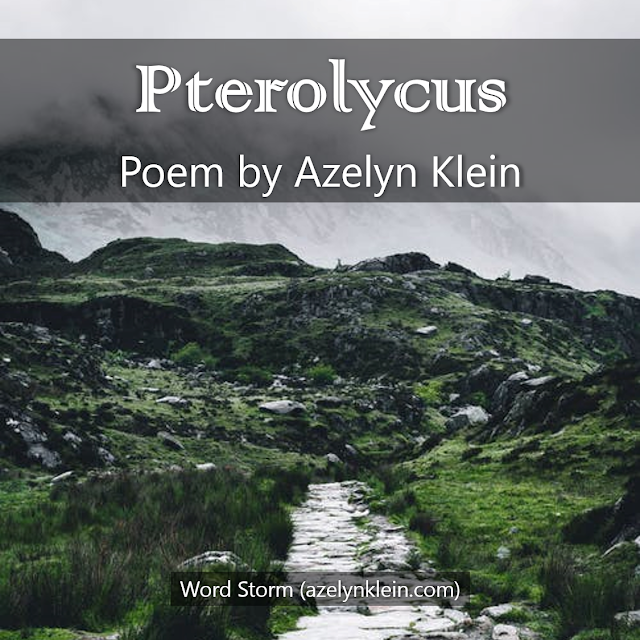 
All my life, I’d been told,
“My how fast you can run—
don’t you want to join the pack
in a hunt or maybe
scout the paths ahead?”
Why ever would I want
to lope up the slope
only to stare and howl
at the Moon?

Now that I’ve found
the green where they leap and soar,
I realize
I’m not ready.
I know these wings of mine
are meant to fly,
but I can barely get off the ground.

They say one in every two wolves
that roam these plains
turns out to be a loner—
I didn’t ask for the way
my legs get scratched when I falter
in the air and crash into the rocks,
nor the way my feathers are ruffled and bent
from yet another fight,
bared fangs,
snapping jaws.
This is nothing like my song
to the Moon.

Now I limp onward,
blood crusts over my wounds,
and I spread my wings.
Only when I am able
to lope again
can I finally
finally
get off the ground.
I may not be able to fly as high
or as long as you—
not yet—
but maybe someday I will.

When I return to the forest,
my scabs have turned to scars,
hidden under tufts of fur and feathers,
and I’m asked,
“Don’t you miss the freedom of the green?”
If freedom is a fight
encrusted with snapping teeth
and empty days,
I don’t miss it
at all.

Yet I wouldn’t change
the way I now
take to the sky,
surpassing the limbs of trees
and climb higher
until I reach the cliffs,
rest on my haunches
and howl at the Moon.

Let’s chat! What did you think of the poem? For those who have moved, is there any place in particular you miss? That you don’t miss? If a mythological creature represented a part of your life, which creature would it be?